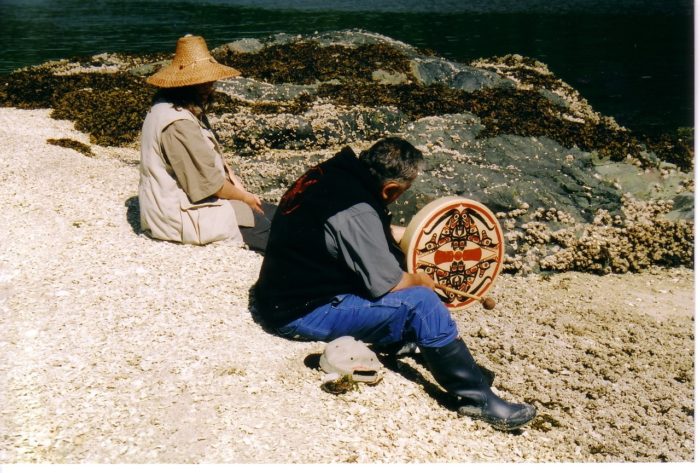 The breadth of knowledge preserved in traditional songs around the world is being showcased in a recently-published scientific journal.

An issue of the Journal of Ethnobiology titled “Ethnobiology Through Song” looks at the complex information about the land and environment engrained in Indigenous music.

Published in September, it is co-edited by Dana Lepofsky, an archaeology professor at Simon Fraser University, and Álvaro Fernández-Llamazares, a musician and researcher at the University of Helsinki.

The Journal carries a special dedication to the late Kwaxsistalla Wathl’thla Chief Adam Dick, Clan Chief of the Kawadillikalla (wolf) Clan of the Dzawada’enuxw, Kwakwaka’wakw Nation, for his unique knowledge of thousands of traditional songs regarding every aspect of the natural and supernatural realms of his world.
“I have been an ethnobiologist for many decades, but I had completely missed researching this aspect of our ethnobiological world, until I came into contact with Adam,” Lepofsky said in a statement.

Dick’s wide-ranging knowledge came from his training since he was a child. He was deliberately hidden from residential school agents by his community so that he could receive a cultural education befitting a Clan Chief.

Dick’s longtime partner Oqwilowgwa (Kim Recalma-Clutesi) of the Qualicum Nation said his mind was “like a computer.”

“I literally couldn’t find a scientist in the natural world, that he couldn’t match their knowledge,” she said. “He had no problems letting people know that they got it wrong.”

Academics would be blown away to learn new information about the territory from Dick, but for him, the knowledge was normal and day-to-day, said Oqwilowgwa.

She talks about a researcher who was incorrectly theorizing about a tiny clam garden at the site Adam was secluded and why it was so small.

“He leaned over to me really quietly said: ‘I made that as a kid,’” she said with a warm laugh.

Although bridging those gaps between the colonial world and Indigenous culture — much of which still must be protected by individual communities and knowledge-keepers — was awkward at times, Dick made time to find ways to share with those who wanted to learn.

“It doesn’t mean that academia is wrong in any of this, we have been able to find an incredibly good balance,” Oqwilowgwa said.

“It will always be that tension and pull because it’s based on different ways of knowing. I’m really excited that we are starting to explore and look at things in a different way.”

In one example highlighted in the journal’s introduction, Dick could share songs that invoked landmarks of his clan’s territory, linking himself to a specific landscape even when he was away.

He also knew songs that held knowledge about ancient ecological practices such as making and tending to clam gardens.
“He single-handedly shifted how we look at anthropology on this coast,” said Oqwilowgwa.

She is now working on launching the Ninogaad Knowledge Keepers Foundation, which will feature decades of documentations of Dick’s traditional knowledge.

“He changed the widely-held view of us being mere hunter-gatherers to being sophisticated marine culturalists, horticulturalists and knowledge bearers,” she said.
Journal co-editor Lepofsky said the collection of papers showcased in the Journal of Ethnobiology “only skims the surface” but she hopes it gives insight into the depth and breadth of knowledge embedded in traditional songs.

As well as discussing music in B.C., the papers feature information about traditional songs from Western Mongolia, Alaska, Bolivian Amazonia and more.

After the huge loss of culture that came with residential schools, the Potlatch Ban and other assimilation efforts in Canada, a wider focus has recently been put on the importance of Indigenous languages and the imperative to preserve them.

As the UN-declared 2019 Year of Indigenous Languages wraps up, that focus is continuing and evolving to include other areas such as song.

“(The papers show) that throughout the world, songs have a huge amount of knowledge in how people interact with the world around them,” Lepofsky said.

The “Ethnobiology Through Song” issue can be found via https://bioone.org/journals/journal-of-ethnobiology/volume-39/issue-3.