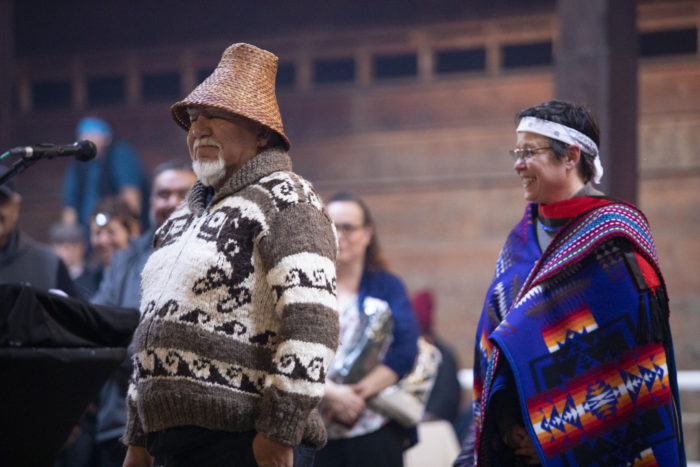 A historic Snuneymuxw longhouse ceremony has been held for the installation of a new president and vice-chancellor of Vancouver Island University.

Dr. Deb Saucier has been in the role since July, but was formally endowed with powers and responsibilities during the event late last year.

There ceremony was jointly hosted by Snuneymuxw and VIU, and incorporated both Coast Salish and university protocol.

Darren Good, the event’s Shqwi Qwal (speaker), said it was the first time in history that such an event took place in the Snuneymuxw longhouse.

“It’s about building bridges,” Good said at the event on Nov. 15.

“It’s for the future of our children who are going to go on to university and get an education.”

During the ceremony, Saucier spoke about her vision for VIU during her five-year term.

She said she wants VIU to be an inclusive university — one that invites everyone in and helps community succeed.

“It’s a two-way street and we will walk together with the communities we serve,” she said. “Our strength is in our desire to lift each other up, to celebrate our successes and to help each other when we need it.”

VIU Chancellor Louise Mandell said the ceremony was important because it represents a step forward in the ongoing process of reconciliation in the education system.

“We draw from the wisdom of Indigenous laws and traditions that instruct us to ask how our actions today will impact generations into the future,” she said. “This day is part of VIU’s evolution and growth.”