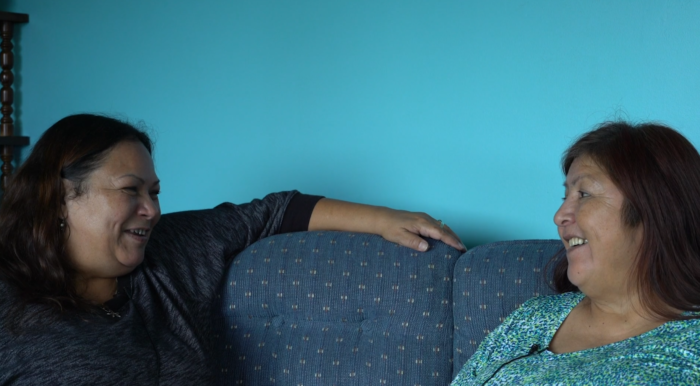 A woman’s search for her Coast Salish family has led her to Homalco Nation, where she has connected with relatives that she previously didn’t know she had.

Most information about her Indigenous grandmothers had been stripped from the colonial archives. But with the help of University of British Columbia geography PhD Jessica Hallenbeck, Georgeson has finally connected with some of their descendants — rediscovering her Coast Salish identity in the process.

The two have been searching for the family members together since 2014, when Georgeson was an Indigenous Storyteller-In-Residence at Vancouver Public Library.

While she was there, she had asked Hallenbeck to help her to search for information about her grandmothers.

“I’ve been searching all my life to know these stories,” Georgeson said in an interview.

“It was a big push for me was to know who they were, where they were from, and about their lives.”

The two women began going through reels and reels of microfiche — Hallenbeck utilizing her academic background to navigate while Georgeson analyzed the pieces of information through stories that she had heard as a child.

At first, they only knew minimal information about the two grandmothers. But after analyzing the archives and meeting with members of Sḵwx̱wú7mesh Nation, they discovered much more about the women including their traditional names.

Georgeson learned of her great-grandmother Tlahoholt’s children: Emily, Albert, Annie, and George. Annie was connected to Sḵwx̱wú7mesh, while her siblings were connected with Homalco.

As the pieces of the puzzle began clicking into place, Georgeson ended up discovering her cousin, Fay Blaney, who is from Homalco and lives in Vancouver.

Together, they travelled to Homalco with Hallenbeck in order to share the information and to introduce Georgeson to more of her family members.

The journey to Homalco was recorded in a short documentary called In Defiance of All That, which was directed by Georgeson and filmed and edited by Hallenbeck. It was produced through Lantern Films with the support of UBC’s Department of Geography and Public Scholars initiative.

The documentary was included as part of Hallenbeck’s 2019 PhD thesis The water we call home: five generations of Indigenous women’s resistance along the Salish Sea.

In the documentary, Georgeson and Blaney can be seen sitting on a couch, laughing together like old friends.

“Fay and I have just recently met, and we’re cousins,” Georgeson explains.

“I find it fascinating that we’re just like a month apart.”

Blaney nods in agreement, smiling: “And you’d think that we’d known each other all our lives, the way that we behave!”

Georgeson shared with them some of her own family history that she knows, which is tied to Galiano Island and specifically Georgeson Bay. She was raised on fishing boats that would go back and forth between Galiano Island and Prince Rupert, through Homalco territory.

The Blaneys spoke about how they grew up fishing as well, which was often a family affair and would mean everyone could eat from the ocean even when money was tight.

“I was born in Church House in a small village there and we had a world of our own there, although it was isolated, I still remember a lot of the memories of it,” said Bill, who now lives on the nation’s current reserve which is landlocked away from the ocean outside of Campbell River.

“I was born and raised on the water and we miss it quite a bit. I think that a lot of the members talk about that.”

Fay said that disconnection — and the removal of Indigenous women from colonial archives — is all part of the wider decimation by Canada of Indigenous families and communities.

“In many ways they were very successful and a lot of us are going around with this shame that we don’t really feel like we belong within our families,” she said.

“This is in defiance of all that, refusing to be separated. … An act of resistance.”

Georgeson said when she first started searching for her family members back in 1992, she was connected with a priest who told her: “No one had survived.”

She took what he said to heart, but never stopped looking. Finding her relatives recently has been “like a miracle” to her, she said.

“It just goes to show the stories that they will tell to keep our families separated,” she said.

In July of 2019, a group from Homalco travelled to Galiano Island, where they in turn learned about their connection to that place, and visited the grave site of Sar-Augh-Ta-Naogh and her son William (Billy).

In the final page of her thesis, Hallenbeck describes that gathering, which involved Rosemary as well as Fay and Darren Blaney and Corena Wilson.

“This occasion marked the first time in 122 years that descendants of William and Tlahoholt’s daughter Emily were gathered together on Galiano Island,” the thesis reads.

On the last evening of the gathering, the group gathered to screen the In Defiance of All That film.

“Family who had just met for the first time gathered,” the thesis goes on to describe.

“The film … brought the stories we had found of family and water to her children and grandchildren, to her family on the water, to her brothers and uncles, to her ancestors.”

Now that connections have been made, Georgeson and Hallenbeck said they are looking into different options around screenings for the film, a possible museum exhibit and other ways to continue their work together.

For now, more information about their research can be found at www.facebook.com/WeHaveStories or rosemarygeorgeson.wordpress.com.