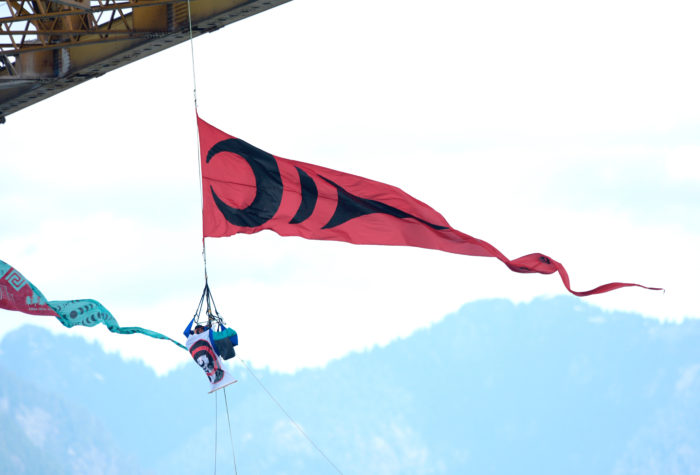 In July of 2018, Tsleil-Waututh member Will George (Swaysən) made headlines when he rappelled himself from a Vancouver bridge in opposition of Kinder Morgan.

At the time, George was part of a seven-person “aerial blockade” that was held to stop tanker traffic from passing through as part of a wider action against the Trans Mountain pipeline expansion.

During the blockade, seven 40-foot banners featuring the work of Indigenous artists also flew from the Ironworkers Memorial Bridge.
Now, those banners are being featured in a new art exhibition called Acts of Resistance.

The exhibit at the Museum of Vancouver features the power of art to disrupt the status quo.

MOV Indigenous curator Sharon Fortney said the museum had approached blockade organizers Greenpeace about exhibiting the banners, which had been sitting in police custody, crumpled up in plastic bags.

“In August of 2019 the museum was pleased to receive a donation of six of the banners from Greenpeace with consent of the artists who designed them,” Fortney said in a statement.

“We immediately revisited our exhibition schedule to create an opportunity to showcase them.”

The seventh banner, which George painted, is on loan to MOV as it is otherwise being used for public outreach.

For the exhibition, George also created a video in collaboration with multi-media artist Ronnie Dean Harris — who painted one of the banners — sharing his experience during the blockade.

“Our Indigenous rights are being completely ignored, the safety of our water is being ignored, and most of all my son’s future is at stake,” George said in a statement.

“I will do whatever it takes to protect the water and my family and your family.”

The exhibition opens on Feb. 5 and will be on display until July.