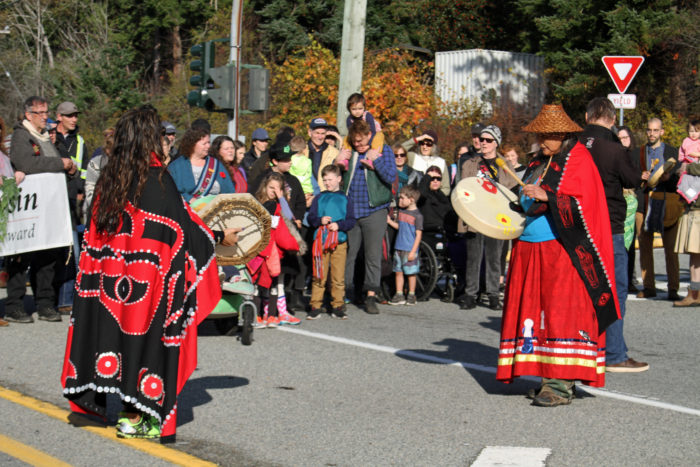 Above: Cyndi Pallen , left, and Rose Henry of Tla’amin lead marchers in a Walk for Reconciliation on Nov. 10. Photo by Todd Peacey.

Children who were taken from Tla’amin and put into residential school were honoured during a Walk for Reconciliation in Powell River.

Dozens of people from the Indigenous and non-Indigenous communities joined the event on Nov. 10, which began at Willingdon Beach.

The walk ended at the city’s wharf, which Tla’amin Elder John Louie (yaχwum) explained was the spot where ships would come in to pick up children and take them to residential school.

“For our people, September was a tough month because that’s when we were taken away from our families, from our communities,” said Louie, who is a residential school survivor.

During the walk, people held boughs of cedar, which were then dropped into the water during a cleansing ceremony at the wharf in honour of all the children who were taken.

“One of the things we always were told is you do it in ceremony so you can let it go,” said Louie, who led the ceremony.

“It wasn’t ours to hold but for a lot of us, we carried it.”

The Walk for Reconciliation was part of a wider initiative by the group Hɛhɛwšɩn, which was started by Louie, fellow Tla’amin member Cyndi Pallen (čɩnɛ) and non-Indigenous friend Phil Russell (kʷʊnanəm).

Meaning “The Way Forward,” Hɛhɛwšɩn has support of Tla’amin leadership and has the group has led various reconciliation-focused events in Powell River and beyond.

“As part of the healing we’ve conducted several ceremonies, welcoming home the children from residential school, we went to Sechelt and did the same thing we’re doing here today,” Pallen explained.

“Reconciliation is ongoing, individual and collective process which takes commitment from all those affected. I think we’re all affected.”

Pallen also led a moment of silence at the event, while Tla’amin member and activist Rose Henry spoke and led the group in song.

Henry said because she grew up in foster care, she often has felt like an outsider in both the Indigenous and non-Indigenous communities — which common among people who were taken from their nations.

“That’s what colonization did to me, it stripped me of my right to know my language, to know my (birth) mother, and of my place in my community,” she said.

“Now our oppressors are beginning to wake up because they realize it was a huge injustice done to the people throughout Turtle Island. Now they’re saying enough is enough … and they want to fix things.”

Henry said she sees the concept of reconciliation as a way to learn from — and correct — past wrongs.

“We can give hope to the next generation (and) we can give a lot of hope to ourselves,” she said.