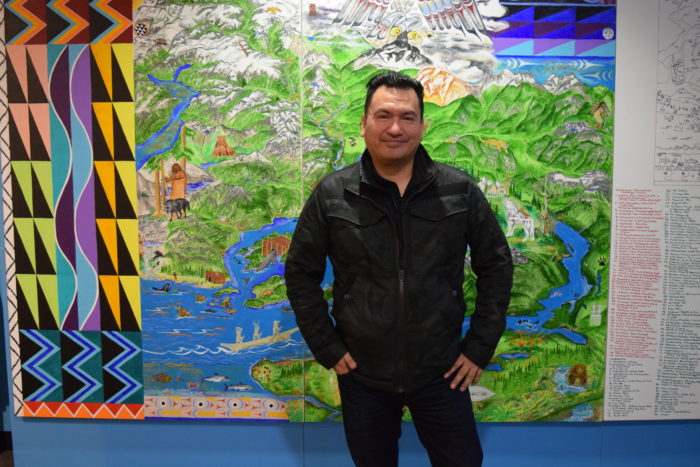 Photo: Ian Campbell stands in front of his painting ‘Temixw’

A territorial map painting by a Sḵwxwú7mesh hereditary chief showcases hundreds of stories that are tied to the nation’s land.

Ian Campbell’s largescale piece “Temixw” contains a total of 308 images that relate to his own connection to the territory, traditional legends and teachings he learned from elders.

The map is now on display in the main lobby of the Museum of Vancouver after an unveiling and witnessing ceremony in December.

“Art is such a great way to showcase our rich history that spans many thousands of years,” Campbell said in an interview.

“And having an opportunity to showcase this here at such a prominent museum in Vancouver is a tremendous honour, because we’ve been invisible in our own land for far too long.”

Campbell said he has been thinking about the idea for a territorial map since he was a youth.

When he was approached to do the piece, he called up Stz’uminus artist Luke Marston, who gave him guidance on how to scale the ideas and put them to paper.

The result is a map containing an assortment of images that are both realistic and traditional, with a Sḵwxwú7mesh weaving design painted alongside.

Campbell said the work took him about two and a half months to complete.

“I wanted to be inclusive of the Musqueam, Sḵwxwú7mesh and Tsleil-Waututh … to show that we are one family in Vancouver, the shared territories.”

In the map, Campbell painted lands stretching from the Lower Mainland and beyond, stretching up through the District of Squamish.

He pointed out how the painting really begins with a creation story represented in the top right showing Raven, Seagull and the Box of Daylight.

From there, the painting delves into Sḵwxwú7mesh stories of the first ancestors, animal transformation stories and ecological memory.

Purposefully, Campbell kept all of the stories and history prior to settler contact.

“I wanted to show pre-contact to demonstrate that our land is laden with mythology, with place names, with history,” he said.

“And every one of these stories, I wanted to simply use one symbol to show that story.”

On the right side of the map is a colour-coded legend that viewers can refer to in order to see names in both Sḵwxwú7mesh and English that refer to the people, places, and things seen in the images.

Campbell has also written an acknowledgement that recognizes his grandparents — Chief Lawrence Baker and June Baker — and a list of other people he has learned from.

The work is expected to remain at MOV for the next five years, after which it remains to be seen where it will go. Campbell said he hopes it will continue to be used as a teaching tool.

“I wanted this to become a showcase for schoolchildren,” he said.

“Not only Squamish children, but all children, to come appreciate that this is really a story of humanity and our resilience.”