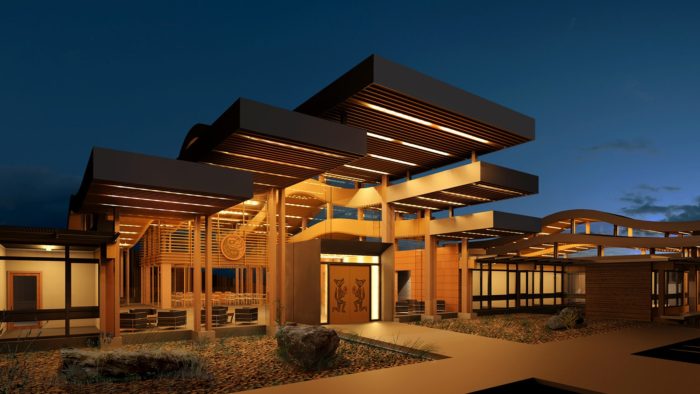 Tsleil-Waututh’s new administration and health building has become a source of pride in the nation, capturing attention with its intricate cultural designs and use of recycled materials.

The long-awaited centre reflects the nation’s wider environmental values and goals of sustainability, according to senior staff.

The striking building was completed a year ago and is now a fully-operational hub in TWN’s Sleil-waututh Village (Burrard Inlet Indian Reserve No. 3).

“The design is really intricate, but what’s really noticeable right away is our roof, which is waves,” said Greg Edgelow, the nation’s public works operations superintendent, in a phone interview.

“We tried to use as many energy-efficient features as possible. And because there’s so much glass, you can always see outside and see nature from wherever you sit.”

The 31,000-square-foot, two-storey structure’s stepped, wavy roof reflects the waters of Salish Sea, the shores of which are just downhill from the building.

It contains cedar and fir logs from the nation’s territories incorporated throughout the entire structure in not only the undulating roof, but also in imposing large beams that give a powerful feel to the main gathering space, which can hold more than 100 people.

Much of the wood was supplied by BC Passive House, which specializes in environmental building materials, and the carpets are made from recycled fishing nets. Lights are all on timers to save electricity, and radiant heating under the floor cuts back on energy use.

“Most of the features that go into a LEED-certified structure have been incorporated into the design and architecture,” Edgelow said, although the nation opted not to pursue a formal designation.

The captivating design for the building was by Lubor Trubka Associates Architects. The firm said it took inspiration from the Tsleil-Waututh’s intense historic and ongoing connection to the water — the nation’s name means “People of the Inlet” — as well as their tens of thousands of years experience with “building technologies using the versatile properties of wood, particularly cedar.”

The rationale for the new building, according to the band’s website, was to “be a focal point for community,” and was a much-needed upgrade after a decade of major growth in revenues and staff levels.

It houses the Tsleil-Waututh Nation’s government, its band administration, the community’s health clinic, and staff overseeing finance, human resources, justice and communications for the nation.

The nation’s former public works director Dale Komanchuk said in a statement that the nation also used as much local timber and natural resources as possible in order to reflect its sustainable values.

“From time out of mind, Tsleil-Waututh, the People of the Inlet, have relied upon the land and water resources of their traditional territory,” said a statement on the website of the B.C. wood-product organization Forestry Innovation Investment.

According to Lubor Trubka architects, their contribution to the reserve is likely just the “first phase of a campus-style village centre,” which would be “anchored and dominated by” the government and health building.

“We are developing a campus concept in the context of community growth, natural attributes, civil infrastructure, and other compatible future land uses,” Lubor Trubka stated on their website.

“A key requirement was to create a Master Plan expressive of Tsleil-Waututh philosophy, cultural heritage, and to establish a framework within which the community can grow as their future needs evolve.”

For Edgelow, the feedback from community members has been rewarding and a source of pride for many.

“Everyone is just amazed at the architecture and the style,” Edgelow said. “With many First Nation communities, they want their history, culture and beliefs are incorporated into their buildings, and Tsleil-Waututh being at the forefront of many First Nations’ thinking on environmental issues, those aspects were really important to them.

“TWN as a nation is growing, there’s not enough housing or other infrastructure to accommodate all of them, so there’s going to be a lot of future development.”