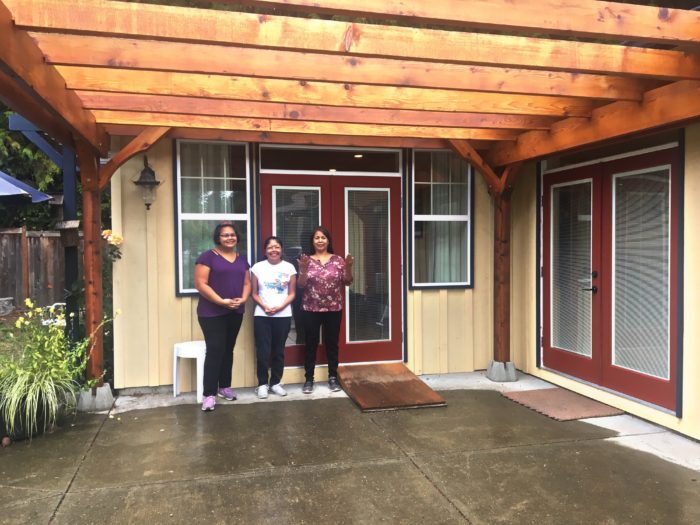 A Hul’q’umi’num’ house in Duncan, B.C., has created space for speakers of all ages to practice and preserve the Coast Salish language.

Fluency is the goal of programs at the Shhwulmuhwqun – Hul’q’umi’num’ Language House, where a group of students led by elders, language teachers and linguists meet regularly.

The Shhwulmuhwqun first opened in 2018 and is run by the Hul’q’umi’num’ Language & Culture Society.

The venue is home to the Simon Fraser University language academy, where students can earn undergraduate and graduate certificates, diplomas and degrees while studying to become fluent in Hul’q’umi’num’.

This includes a unique master’s degree in the Linguistics of a First Nations Language — which has so far seen 14 graduates with seven more to come this year.

Meanwhile, more than 30 students have finished undergraduate certificates, while seven have finished diplomas and moved into the BA program.

Rae Anne Claxton Baker, a member of Tsawout First Nation, started as an undergraduate in May 2018 and is now in the master’s program.

She said the process has been overwhelming at times — but that the students of all levels work together with the fluent speakers as a community.

“We’re a bunch of university students coming together because we see this need for our children,” Claxton Baker said.

“Language is really an emotional thing because it is our worldview, and it has been illegal to express our worldview for past generations. So now that it’s legal, how do we learn? … We’re here to support each other and that is huge.”

SFU linguistics professor Donna Gerdts said the program is not a typical university program because the participants, along with their course work, are engaged in community-based language revitalization projects and teaching.

“We have a goal of making language learning fun,” she said, with students working through innovative immersion activities such as games and theatre.

Students also work on recording legacy stories and creating new ones — over the past six years, more than 200 new stories have been recorded through the SFU program.

Chris Alphonse, a Quw’utsun’ BA student, spoke about the urgency of the work being done at the Shhwulmuhwqun.

“Sadly, half of the remaining fluent speakers have passed away since we started our program,” he said.

“We are working against time to strengthen our language. We face many difficulties, but the urgency and seriousness of purpose helps to keep us motivated.”

Thomas Jones (Kweyulutstun) from Snuneymuxw First Nation, who teaches in the undergraduate program, added that people must be willing to go back to their communities and breathe new life into the language.

“We have to be reminded to uphold the sincerity of what was left behind for us,” he said.

“You have to sacrifice to be able to learn the full extent of the language, not only how to pronounce it properly but to understand the cultural significance behind the wordings.”

Many of the people who are part of the Hul’q’umi’num’ Language & Culture Society have been involved in language programs for decades — in the past, often struggling to find spaces to gather in.

Kwa’mutsun Elder Ruby Peter (Sti’tum’at) has been working on teaching and documenting the language over six decades and created some of the first Hul’q’umi’num’ resources.

Last summer, Sti’tum’at received honorary doctorate degrees from both SFU and the University of Victoria for her work.

She and her sister Delores Louie (Swustanulwut) are the lead native speakers and linguists who teach in the language academy.

Prior to the language house opening, Stitum’at and the others would have to drive around to various locations, carrying their resources around and only meeting when they could find an available space.

Then a few years ago, student Sally Hart moved to a new house, where she converted an empty workshop space into a language house, which opened in the spring of 2018.

Hart, a PhD student who also teaches in the local school district, saw the importance of bringing many generations together in a space dedicated solely to language.

Now, at the Shhwulmuhwqun, Stit’um’at works alongside her daughter Bernadette Sam-Peter, a recent MA graduate, and her granddaughter Martina Joe, who is a BA student.

Joe and her two-year-old daughter Ava-Lynn also participate in the FPCC-funded language nest.

Claxton Baker is also working within several generations of speakers. Along with doing her master’s degree, she is also doing a master-apprentice program via FPCC where she spends time speaking Hul’q’umi’num’ with her grandmother, Sarah Modeste.

Meanwhile, her six-year-old daughter Eva-Gail has been learning the language for the last two years.

“I print out her colouring sheets at home, and the other night she says to me: ‘hay ch q’a’, si’em’, hay ch qa’,’” Claxton Baker said, laughing.

“For (my daughter) to be able to have pride about speaking it, that’s overwhelming to me.”

The program is high in-demand, but the programs that operate through the house are all funding dependent, so there are still struggles to afford operating costs and to provide consistency for those who want to learn.

Sti’tum’at expressed her pride in the progress of the students, and said she hopes the initiative can eventually grow in order to meet the needs of the community.

“What I am wishing for is a Coast Salish university with all Coast Salish faculty, and all courses having Hul’q’umi’num’ language content,” she said.

More information about the language programs and other resources can be found at http://sqwal.hwulmuhwqun.ca.