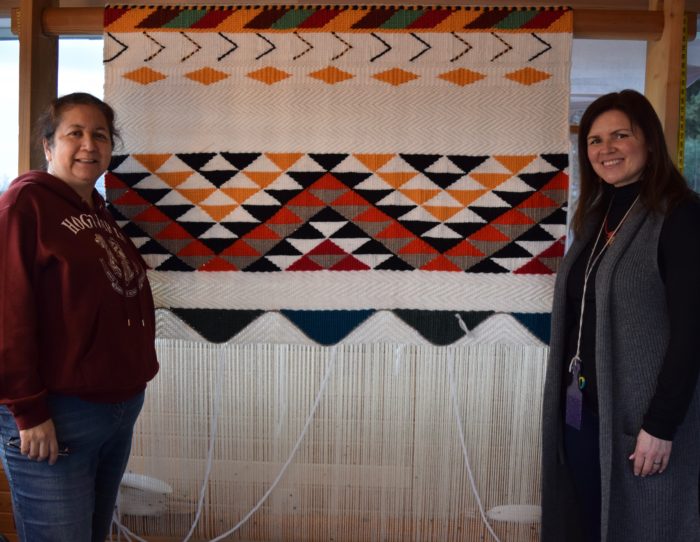 Above: Tsleil-Waututh Coun. Deanna George, left, and Angela George (qʷənat) with the weaving.

A weaving created by artist Angela George (qʷənat) is also a complex governance document that will serve Tsleil-Waututh Nation for centuries to come.

George shaped the piece titled “Weaving Governance” as part of a final project for an executive master’s degree that she recently completed at Simon Fraser University.

George, a member of Squamish Nation who lives at Tsleil-Waututh, said she will gift the 10-foot weaving to TWN as a governance model for future generations.

“As you can see it’s all hand woven and one of the main purposes of this is to repatriate our way of governing,” she said.

“This is our set of laws. This is a document. Just because it’s unwritten it doesn’t mean it’s any less valuable.”

George said while completing the two-and-a-half-year program in Indigenous Business Leadership, it felt natural to translate some of the concepts into weaving designs.

As she was learning about governance principals, management frameworks and leadership philosophies, she started translating the ideas into images and doodling them all over her notes.

At one point, she said, she was talking with the late Tsleil-Waututh Elder Leonard George about her desire to turn the concepts into a weaving for the nation.

The elder and former chief was ill at the time, and he had told her that when he was better, they could sit down and he would tell her all the stories so she could weave them.

“After he had passed, it kind of stuck with me that commitment we had made to do this and I approached the family,” she said.

Leonard’s son Gabriel George, who was culturally trained by his father, shared many songs and stories with her that have become the basis of the weaving.

The design is complex — starting at the top with four colours representing the four Coast Salish laws: truth, family, culture/spirituality, and wellness.

The weaving contains information about Tsleil-Waututh’s territory and complex social structures, creation stories for the first man and woman, canoe teachings, and much more.

The weaving also focuses on the concept of resiliency — featuring water designs that represent that ever-changing flow that maneuvers around obstacles.

“We learn to adapt and live … while still ensuring that we hang on to those ancient laws and value systems,” George said.

“So everything in this has a purpose and a meaning.”

George has been creating the piece as one of the artists-in-residence with the Blue Cabin — a program that is featuring various weavers on Vancouver’s seawall between September 2019 and May 2020.

She has been working on the piece with help from members of Tsleil-Waututh, including Coun. Deanna George who wove behind her while George spoke about the piece during an artist talk on Jan. 11.

George is the second weaver to be featured for the eight-week residency, and will be followed by Skwetsimeltxw Willard “Buddy” Joseph and Chepximiya Siyam Chief Janice George, who will start their time at the cabin on Feb. 15.

More information about the program can be found at www.thebluecabin.ca.