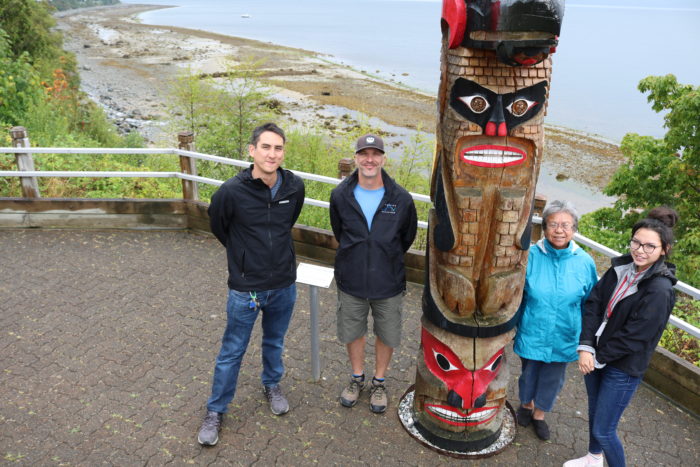 Above, from left: Alex Sutcliffe, Jordan Enns, Betty Wilson and Alana Washington, with fish traps and petroforms visible in the background. Photo by Phil Russell.

“Tla’amin is not just like any other neighbourhood. We belong to a community that is thousands of years old!” — Words spoken by Maynard Harry.

We know from the oral record that Tla’amin people have been here since time immemorial.

When it comes to the scientific dating, some of the oldest remains in Tla’amin territory uncovered so far date back to over 7,600 years ago, as discovered from a Tla’amin-SFU project from a midden at Grace Harbor. The Lang Bay site could also be as much as 9,000 years old. We know Tla’amin people have been here longer than all of recorded history: Before the rise and fall of the Roman Empire, long before the birth of Christ, even before the Egyptian dynasties and pyramid building civilizations, Tla’amin people were living here on this land.

Recently, archaeologists in B.C. have found evidence of sites dating back over 12,000 years on Quadra Island. In Heiltsuk territory, a 2017 archaeological excavation uncovered tools and charcoal fragments from a site that dated back to 14,000 years ago.

Tla’amin people knew how to live in this part of the world. Everything that was needed was provided by the Earth. The stories, teachings, history, language and culture that defines Tla’amin people, has been passed down from one generation to the next over thousands of years of time. The relationship with the natural world was at the heart of Tla’amin culture. Changes would be slow over the millennia. Over time Tla’amin society would have continued to grow becoming increasingly organized and complex. The evidence can be seen in the stone fish traps that remain to this day, all along the coastline, but highly concentrated between Townsite and Grief Point.

When archaeologists find structures on the beach that are not natural formations, they are termed features. When there are many features close together, they form a complex. The entire coastline from Townsite down to Grief Point contains back to back complexes indicating that there was a significant population density of people living in this region. The sheer scale also indicates that the people were also part of a highly organized society. It is impossible to know just how many people were living here before, early census figures were recorded after the first waves of epidemics and are not representative of earlier populations, but the Tla’amin oral record has maintained that there were thousands of people living here pre-contact.

As the fish traps would have sustained large numbers of people in their prime, they point to a time period long before contact, hundreds of years ago. Much of the information about how the fish traps were used has been lost but there are still elders in the community that have memories of witnessing their grandparents using some of these structures.

Freddie Louie recounted a story with his grandmother at Blubber Bay: “We used to go to saʔyayɩn and pick seaweed, but on the rock bluff when we were nearly finished she’d start beating up on the mussel and barnacle, when the tide was coming back in, she used to set her net right around it and perch, rock cod and all that come and feed on it. She had it all, didn’t have to go look anywhere else. I used to think she was crazy, lots of ducks too and birds would come around when the tide came in, then they were gone, but they used to catch their fish like that easy… They squished up t́ᶿomaǰu (barnacles) and saʔma (mussels) before the tide was coming in, then the crabs would come in and when the tide went out the crabs would be trapped there. They also did it for p̓agi (flounder/halibut). It was kind of a delicate thing to get, in the sandy places they’d beat up on the mussels, they’d take the rocks away from there, block it off, make it sandy, then the flounder would come in too”.

It’s very likely the remnants of these large-scale aqua farming structures served multiple purposes. They would have doubled as clam beds and been used to target different species of fish and marine invertebrates and crustaceans. Anybody can see these features for themselves by walking along the rocky beaches at low tide. The beach in its natural state is covered in an even layer of rocks. Areas where the sand is visible is typically a result of cultural modification. Second Beach between the Mill and Willingdon Beach has some pretty distinct structures and walls. Some of the complexes and cleared areas here are over 200m long. But even this is dwarfed by the section of coastline between the Marina and Grief Point where there are continuous structures that stretch for over a kilometer in length.

Colleen Parsley from Aquilla Archaeology is one of the archaeologists who has been studying the coastal features in this area. In one of her impact assessment studies from 2014 she notes: “The intertidal zone is a continuous complex of petroform features. A complicated arrangement of rock walls and cleared beach areas forming pen-like structures were utilized as fish traps, and may have served also as clam gardens. Long linear cleared zones punctuating the traps were likely canoe skids. This complex of archaeological features is present on the shoreline for several kilometers fronting Marine Avenue from just north of the ferry terminal to at least the actual point of Grief Point… Both the subtidal petroforms and the mid-tidal petroforms contain very constricted openings which appear to be narrow openings for fish to enter and likely were gated off with weir stakes to close off the traps… The best known intertidal archaeological site is Comox Harbour (DjSf-43) located on the East Coast of Vancouver Island directly across the Georgia Strait from Grief Point. By comparing this intertidal complex with other sites in the region we can discern that based on size, DkSd-6 (Grief Point) ranks on par with the Comox Harbour site DjSf-43, the largest known intertidal complex in the Strait of Georgia.”

The Tla’amin complex towards Grief Point is “on par” with the largest known intertidal complex in the straight at Comox! It’s pretty clear the Tla’amin, K’ómoks, Klahoose and Homalco people had sophisticated knowledge and a high level of social organisation, in order to engineer, build and harness these structures on such a large scale.

Back in August of 2019, the Tla’amin Nation was able to document a section of the beach along Marine Avenue at the end of the sea walk. Betty Wilson initiated the project with the intention of capturing video footage to document the site for cultural purposes and for use in future projects. With support from the legislature she teamed up with myself and summer student Alana Washington we set out to scout the location and determine the optimal king tide windows.

It was decided to capture a section of the beach towards the end of the Sea Walk, terminating where the private waterfront properties began. This section of beach was chosen as it was likely to be the least disturbed over time, with less seawalk and no direct waterfront properties. The site selected was in restricted airspace in proximity to Powell River airport so it was decided to commission Jordan Enns from Effective UAV Solutions to perform the flight. Jordan offered to model the site as part of the flight which added another valuable dimension to the information collected. Weather and tide times delayed the flight multiple times but eventually a suitable window opened up that allowed the flights to proceed.

We now have drone photography and video of this stretch of beach, along with a digital surface elevation model, a high resolution ortho mosaic composite image which is the equivalent of the kind of satellite imagery you can access in google earth but offers far greater detail, and a three dimensional model of this section of the beach (which can be viewed in any web browser via this link: https://skfb.ly/6NsCC).

Looking at these structures from the ground is one thing, sometimes all you can see is a pile of rocks, but when you see these sites from the air, it gives you a whole new appreciation for what these remnants represent. The sheer scale, complexity and organisation required to build these formations becomes really apparent and is quite striking. It ignites the imagination to wonder how they were used by our ancestors and what life was like pre-contact. They are also the physical remnants of an ancient system of knowledge, an ancient culture which all Tla’amin people are descendants of.

Where much of the modern world is fragmented and people do not know their ancestral roots or where they came from, Tla’amin people have had an unbroken connection to this land for thousands, and thousands, of years, and that’s pretty special.

This article originally appeared in Tla’amin’s Nehl Motl newspaper and is reprinted here with permission and minor edits.