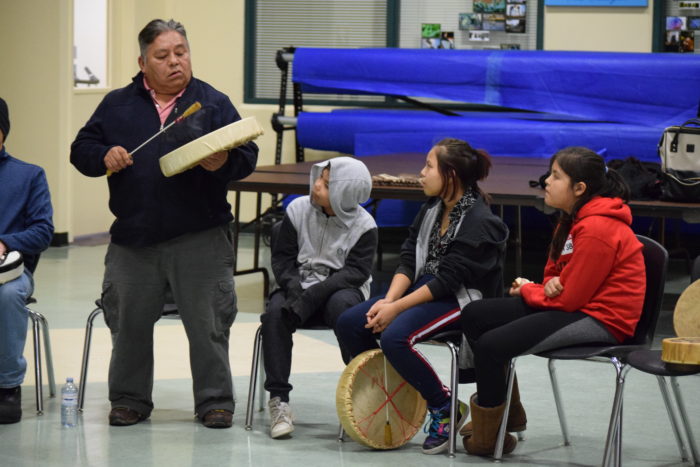 Above: Stz’uminus Elder George Seymour shares a song as his grandchildren look on.

After a regular day at Cedar Secondary School, a group gathered in the foyer, listening to Stz’uminus Elder George Seymour tell a Coast Salish orca story.

Children, teachers, school staff and Indigenous community members — including Seymour’s grandchildren — sat in a circle of chairs listening to the elder.

The event in February was one of School District 68’s first “Singing with Syeyutsus” gatherings that are scheduled to continue in the future.

The get-togethers involve Indigenous and non-Indigenous community members sharing in conversation, culture and a meal. They are part of the district’s wider Syeyutsus Framework, which was officially adopted in February of 2019.

The framework outlines a holistic Indigenous education plan that incorporates traditional teachings and is guided by a group of Coast Salish knowledge-keepers.

“Syeyutsus” is a Hul’q’umi’num’ word that loosely means “walking together.”

Lawrence Mitchell of Snaw-naw-as First Nation is one of the knowledge-keepers on the Syeyutsus committee.

“We are truly in really good times in this district,” he said.

“We’re trying to do what we can to make this the best place we can for our children.”

During the Singing with Syeyutsus event, Mitchell, who sat beside his two children, shared songs with the group who were given drums and the option to join in.

“The more you sing, the more you practice Hul’q’umi’num’, it’s like you’re acknowledging where you are,” he said.

“With (the Syeyutsus Framework) we’re really working together in the school district to figure out how to do that, based on teachings and stories of the land. I’m really fortunate to be part of that.”

Ted Cadwallader, School District 68’s Director of Instruction for Indigenous Learning, explained in an interview that the framework was created in response to the Truth and Reconciliation Commission’s final report and recommendations. In practice, it aims to Indigenize everything the district does from the ground up.

“I think it was largely with teachers in classrooms before, and now it’s a lot broader than that, it’s a systemic kind of approach and it’s not just the Indigenous education department’s responsibility. It’s all of our responsibility.”

To help to implement the framework, Stephanie Johnson was hired by the school district as its Syeyutsus Saays’um (one who does the work to support walking together).

Johnson said the Syeyutsus committee, who she calls a “family,” meets at least once per month to discuss everything the district does.

“We can ask the Syeyutsus family, which we have five Indigenous knowledge-keepers, how did the old people do this?” she said.

“We believe that we’re all interconnected and related through the land that we live on. The underpinning of that land is the most important thing. That’s a huge shift that we’ve had.”

Aside from Johnson, Cadwallader and Mitchell, the Syeyutsus group includes Joan Brown of Snuneymuxw, Pearl Harris of Stz’uminus, Superintendent Scott Saywell, Grace Nielson of Tillicum Lelum and six others.

Johnson said her hope with the Singing With Syeyutsus events is to build relationships between district staff, students and the Indigenous community.

There are now plans to expand the events in the future into “Talking with Syeyutsus” gatherings that would consist of talking circles.

“I think you’re going to see evolution and growth, it’s permeating,” she said.

“It’s just been since September that the knowledge has started to get out wider. We just wish we had more time in a day and more of us.”

Mitchell said it makes him reflect on his experience growing up as a student in School District 68, when Coast Salish culture wasn’t recognized or valued. Now, the work has been starting to unravel the wider destructive history that the education system has had on Indigenous communities.

“A lot of our teachers and employees … are learning Hul’q’umi’num’. They’re there learning songs. They’re talking about the art and getting artists to come in,” he said.

“That’s giving our kids value, letting them know that somebody cares. That would make the biggest difference for me, knowing that my culture is valued and its open for all of us.”