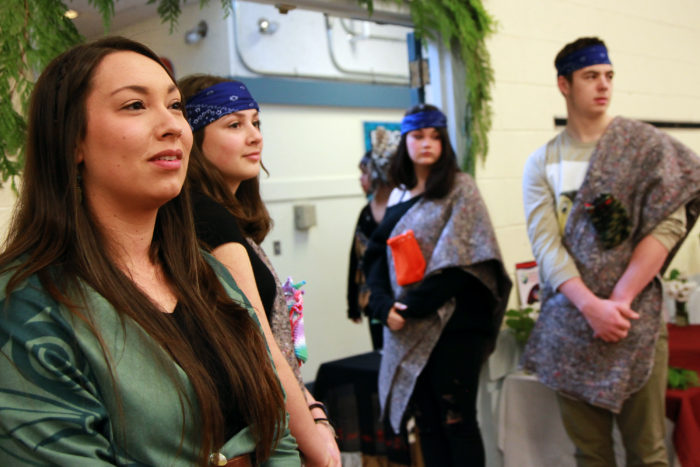 Above: Students welcome their peers, teachers and guests to a ceremony at Salt Spring Elementary School on Feb. 26.

“Hay ch q’a’ Si’em’!” shouted and sang hundreds of Salt Spring Island children and their teachers in unison on Feb. 26, at the invitation of Cowichan Nation Elder Tousïlum.

“Thank you my highly respected friends!”

Their cheerful words of welcome were part of a ceremony celebrating School District 64’s new Indigenous Education Enhancement Agreement, which will boost academic support and monitoring for the 153 self-identified Indigenous pupils on the Gulf Islands, roughly one-tenth of the student population.

Tousïlum carefully explained the importance of a blanket ceremony to the children, teachers and family members who attended the event, which filled Salt Spring Elementary School’s gymnasium.

“This is a very special event here,” Tousïlum told the pupils and staff, saying the five-year enhancement agreement has created “a whole new way, a whole new beginning” for the district.

The three aims of the agreement are to foster Indigenous students’ sense of identity and belonging, ensure they have opportunities to connect with culture and community, and improve their academic success.

“I’m feeling really grateful,” said one high school student, Taylor Akerman of Cowichan nation, asked to speak as a witness of the ceremony. “I’m in a First Nations course at the local high school, and I think it’s really amazing; I just feel really honoured to be here, so thank you.”

Under the new local policy, the Indigenous supports and services offered are voluntary, but a student identified as Indigenous will by default fall under the enhancement program — unless parents or guardians specifically opt them out in writing, according to the district.

Those extra supports include: closer in-class academic monitoring of how Indigenous students are doing, further integrating Indigenous culture and content into schools, and working with parents to improve links between their studies at school and at home.

Shannon Johnston, the district’s principal of Indigenous education, said the agreement is about making sure First Nations, Métis and Inuit students are successful and feel a sense of belonging.

“It’s about a new narrative and a new story for our schools,” she said. “I’m so excited and so proud.”

More B.C. schools are making efforts to better serve their Indigenous students, according to the provincial government.

The province rolled out a new curriculum requirement in 2016 that requires teachers to integrate Indigenous teachings and history into the classroom, including education about residential schools. In 2018, the province signed a tripartite agreement on Indigenous education in First Nations-operated schools with the federal government and the First Nations Education Steering Committee.

In response to the Truth and Reconciliation Commission’s 2015 calls to action, the push has required districts across the province to find ways to incorporate Indigenous teachings into the classroom while unravelling the systemic barriers and dark history the education system has had with Indigenous communities.

The Gulf Islands district is the latest to formalize those efforts, although it has already incorporated many elements into curriculum and school activities. Last year, a Coast Salish welcome figure was unveiled outside the district office that students helped carve with a local artist.

“We will make sure every Indigenous youth, when they walk through our schools, they will get every opportunity to be accomplished, to be strong, to be capable, and to succeed in whatever their dreams are,” Johnston said.

“We commit as School District 64 to helping you along your path to success, that you feel you belong, you have a sense of culture, community and strength.”

Now, the work of implementing the agreement in the curriculum and out-of-class activities begins, said D’arcy Deacon, with the school district’s human resources department.

The Feb. 26 event included a multi-generational dance performance, back-and-forth singing with all the students and staff, and was followed by a potluck lunch.

“We’re heading onto the next stage of the journey,” Deacon said, speaking as a ceremonial witness, “so all of our students can experience each part of the agreement.”