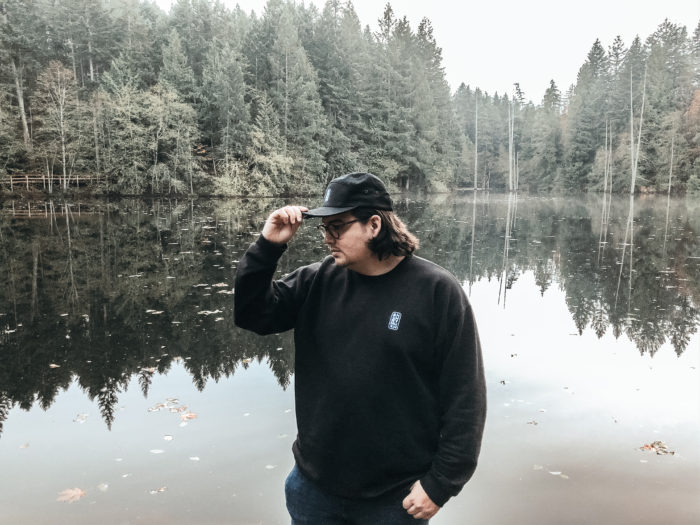 It was a chance meeting at the night market in downtown Nanaimo that sparked an idea for a new clothing line aimed at encouraging a sense of local pride.

Eliot White-Hill, a project coordinator with Petroglyph Development Group (PDG), had noticed some new designs on shirts people were wearing around town — a funky rectangular logo that spelled out the word “Nanaimo” in syllables.

He appreciated the minimalist aesthetic, and when he saw local graphic designer Cory Landels of Nanaimo Supply Co. selling the shirts, hats, and stickers at the Commercial Street market, it hit him.

“The first thing that came to my mind when I saw their logo was, ‘It would be wicked if that said ‘Snuneymuxw,’” said White-Hill, who then gave Landels his card.

“It was something that I hadn’t really seen before in Nanaimo. For whatever reason, there hasn’t really been someone who captured that Nanaimo brand and created this sort of identity.”

The two decided to create a partnership between Nanaimo Supply Co. and PDG — the economic development arm of the Snuneymuxw First Nation — to offer a limited line of Snuneymuxw-branded apparel in the same style.

“A lot of the messaging around the Nanaimo Supply Co. brand — what we were trying to put out there even before any of this collaboration happened — was all about positivity, community development, pushing Nanaimo forward, and confronting the reputation that Nanaimo has,” Landel said. “To do something together just made sense.”

They decided that all proceeds would go toward a fund for the carving of a Coast Salish welcome figure to be installed on the beach at IR #1 just prior to the arrival of the Tribal Journeys boats this summer.

Snuneymuxw artist Joel Good has been tapped to carve an eight-foot yellow cedar log, which will greet the approximately 120 canoes arriving for the annual event, which this year will be hosted by the SFN for the first time in 30 years.

Tribal Journeys is an annual journey in traditional canoes that plots its route throughout the Pacific Northwest and draws participants from B.C. and Washington State. This year, the event will wrap up its final destination on Snuneymuxw territory from July 27 – Aug. 1

Once Tribal Journeys is finished, the figure will be moved to Saysutshun (Newcastle Island).

“The representation of Coast Salish art is really important to me, because historically Coast Salish art has been really overshadowed and disrespected,” said White-Hill. “Fortunately a small group of artists really revitalized the art and now it’s flourishing.”

The clothing line launched last fall with an event at The Vault Cafe. During the event, an additional limited edition collection of ten shirts that featured a spindle whorl artwork by White-Hill were also for sale.

“Nanaimo is Snuneymuxw, that’s a fundamental reality,” says White-Hill. “In Hul’q’umi’num’, ‘Snuneymuxw’ refers not only to the people but it refers really specifically to this place. … I think to recognize where we are, it’s all that re-contextualizing where we are, and bringing the traditional

foundation back to the surface.”

At the time of publication, the project had raised more than $5,400 towards the carving of the welcome figure.

The apparel can be found at Lucid on Commercial Street or online at www.nanaimosupply.com