Hul’q’umi’num’ lessons focus on daily use of language 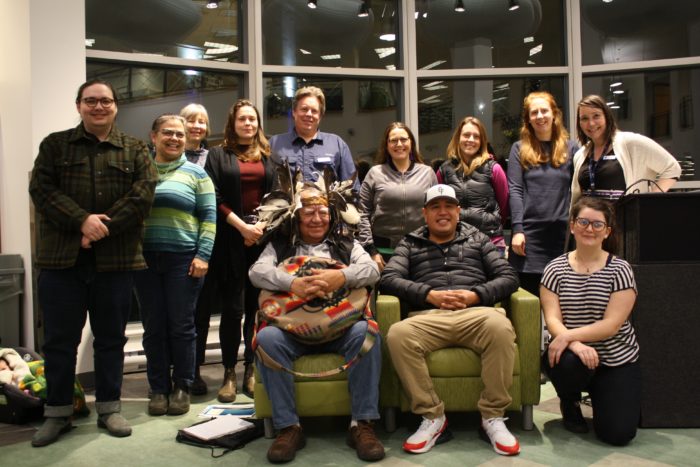 Above: Gary and Adam Manson, front, in a group shot with the language class.

Students of a Hul’q’umi’num’ language learning series gathered to practice their vocabulary and hear stories from Snuneymuxw Elder Gary Manson (Xul’si’malt) in the Nanaimo branch of the Vancouver Island Regional Library on Feb. 11.

The event marked the final instalment of I’lhe’ xwiyuné:m x̌wu’x̌wi’é:m̓ – Let’s listen to storyteller – a five-week course offered through the Nanaimo Art Gallery aimed at teaching Indigenous and non-Indigenous students how to incorporate the Coast Salish language into daily practice.

“This is a ‘very first step’ kind of class,” explained participant and Snuneymuxw member Eliot White-Hill. “It’s been really valuable for people to learn how to pronounce the letters in our alphabet, because that’s the key to unlocking how to understand the language and then be able to go on your own and learn more.”

Being able to sound out the words phonetically can be an issue for new learners and also a possible barrier to having Hul’q’umi’num’ words brought into common use on things like signage or labels.

“The other thing we’ve been learning about is how to introduce ourselves, which is just such a fundamental part of conversing and being in public in Hul’q’umi’num’,” said White-Hill.

He added that teacher Adam Manson also discussed the issue of when to speak and when to listen.

“Fundamentally, the use of Hul’q’umi’num’ and the revitalization of Hul’q’umi’num’ is re-contextualizing space here in Snuneymuxw territory and bringing that back to the surface. But it’s also bridging the cultural divide that’s been created through colonization,” White-Hill said.

The push to offer the class was driven by Arlene Deptuck, Nanaimo Art Gallery’s indigenous education coordinator who started working at the NAG in 2016 and describes herself as a language “keener.”

“I was working in the schools and I was really trying to have my daughter’s school have Hul’q’umi’num’, but the district shared with me that we couldn’t, because there weren’t enough Indigenous students,” she said. “As a Tsimshian living in their territory I wanted my daughters to acknowledge territory by using language.”

Deptuck then began to look at other options. After searching online, she found a video by Eli Hirtle called Voices on the Rise that featured Gary and Adam’s personal journey with the language — which was helped along by a mentor-apprentice program run by the First Peoples’ Cultural Council.

“I did four or five years with Adam out of that program. That’s how I brought him to the language, and he caught on to it really well,” said Gary.

Gary said that he is proud of his son Adam’s teaching abilities. Along with teaching at the art gallery, Adam has taught Hul’q’umi’num’ in the local school district as well as at the Stz’uminus Community School.

Their efforts towards the promotion of their language have not gone unnoticed.

In January, the City of Nanaimo announced that both Gary and Adam had been selected for an Honour in Heritage Award, which “recognizes individuals, groups and corporations who demonstrate outstanding support, advocacy, promotion or interpretation of Nanaimo’s heritage and history.”

The two will be honoured at the city’s 2020 Culture & Heritage Awards on April 16.

The next language series offered by the NAG starts on March 31.