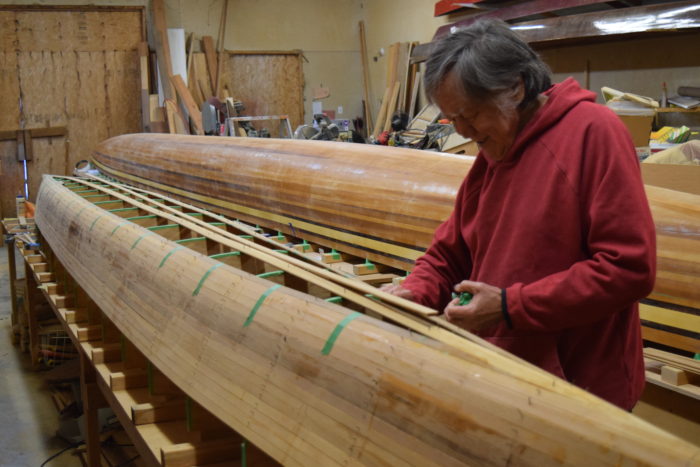 Walking into the warm light of his detached work shed, Garry Norris walks among about a dozen canoes, two of which are still being built.

The workspace at Halalt First Nation smells of cedar, with wood chips lining the concrete floor. Bottles of glue rest on nearby tables, and lines of war canoes of various sizes are lined up like hibernating sea creatures on each side wall.

Norris rests his hand on his latest work-in-progress, an outrigger canoe that he’s decided to try his hand at after the design was shared with him from another canoe builder in Hawaii.

“I’m waiting for warmer weather so I can glass it and get it done,” he said. “Then I can turn it over and start putting the seats in and backrests in, cover the top.”

Although Norris has never built an outrigger before, he knows a thing or two about the process of building a canoe.

He has been making them since the mid-1970s — largely teaching himself after looking at canoes and talking to some other builders.

He always loved canoes as a kid and his family members were part of a canoe club, but he wasn’t allowed to paddle because of a lung condition.

“I wanted to be part of it somehow,” Norris said.

“I looked at the other clubs and they all had small canoes they trained on … We didn’t have any.”

Although Norris’s grandfather built canoes — Norris still has one in in his shed from the late 1940s — he never got a chance to learn from him.
But deciding to build one, he remembered what his grandparents and other elders had told him: If you can see it in your mind, and see it in your heart, you can do it.

So he set off building his first small canoe in his brother’s basement, through a process of trial and error, using a chalk line on the floor.

“Then I got braver still and I made a six-man,” Norris said.

“Of course all these other ones came in between, here and there and everywhere. A few of them have been sold but not too many. I kind of made them mostly for our youth.”

Each canoe in his shed has a story and life behind it, and Norris said he still learns something new about the craft, and about himself, with each canoe he builds.

A retired carpenter by trade, he still works most days is out in his shed, doing the careful and precise work that involves exact measurements and requires a keen eye.

“You think you know it all but on the next canoe you learn something else,” he said.

“If anything it will teach you about yourself.”

He is now passing the skill along to his two adult sons, Chris and Eli, and shares some of the teachings he’s learned with members of a local Indigenous canoe club.

“Our old people say we’re all gifted in some way,” Norris said.

Though Norris is working to keep the craft thriving, it keeps becoming harder to get supplies, he said, as less cedar becomes available each year because of logging.

He has dreamed of creating a dugout canoe or a larger Tribal Journeys canoe so the nation can paddle in the annual event, but the steep price of cedar logs has stopped him.

And though some prominent artists and carvers on Vancouver Island get logs donated to them by forestry corporations, Norris has always flown under the radar.

He pauses to reflect on this fact, having been hesitant to do an interview in the first place.

“But I didn’t ever want to be well-known anyways,” he says, adding with a joking laugh: “Why, what did you guys hear?”

Hul’q’umi’num’ lessons focus on daily use of language