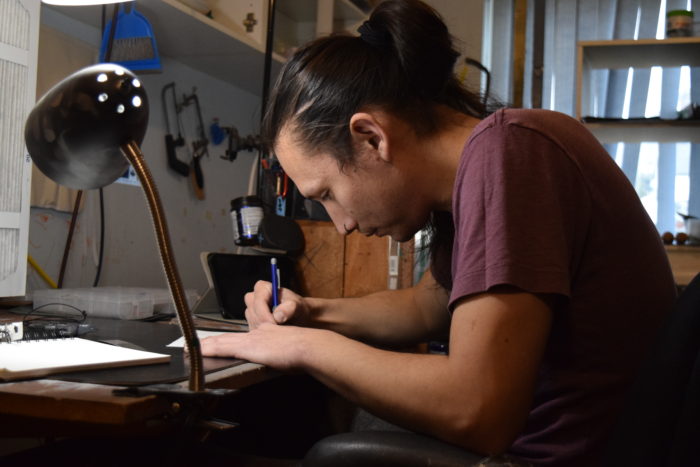 Above: Dylan Thomas (Qwul’thilum) works in his Victoria studio.

Victoria’s Indigenous Artist-in-Residence is working to bring back Coast Salish stone carving, a craft that has previously been dormant for hundreds of years.

Dylan Thomas (Qwul’thilum) was appointed to the two-year residency in late 2019 — during which he will develop artwork, engage in community dialogue, and partake in various events and exhibits.

Thomas, 33, is a member of Lyackson First Nation and has ancestry from Songhees, Squamish and Snuneymuxw. He has lived in Victoria his entire life.

During an interview at his home studio, Thomas laid out a variety of palm-sized dark stone carvings: several pendants and a small intricately-carved bowl.

“This is what I have been obsessed with recently,” he explained.

Thomas said he stumbled upon information about Coast Salish stone carving while he was studying records of Salish artifacts — something he does regularly as a self-declared “online museum database nerd.”

“I’ve collected a huge portfolio of images of Salish artifacts,” he said.

“The stone carving was a really prominent part of Coast Salish art for (thousands of) years.”

Thomas explained that although it was once prominent, the craft stopped being done about 500 years ago, so there is little information about the carvings available.

He said the small bowl he recently made was modelled after images of a similar ones he found in museum collections. He said the bowls were likely once used for a ceremonial purpose, but it is unclear what.

Still, as soon as he began researching the craft, he knew he had to try doing it himself, and began creating the stone carvings less than a year ago.

“It’s been a steep learning curve, but I was surprised I caught onto it pretty quickly,” he said.

“It seems like it was a precursor to the wood carving tradition that followed.”

He started by talking to Haida artist friends who carve with argillite stone to get some basics about working with the medium, and went from there, making his own specialty tools in the process.

Now that he has managed to create carvings that are similar to the images he’s found online, Thomas hopes to teach the basics of the craft to other Coast Salish artists who are interested in learning.

“My goal is to bring this back,” he said.

The stone carving is the latest in a series of studies for Thomas, who spends time researching everything from complex geometrical concepts to anthropological essays.

Thomas was mentored by the late Delmar Johnnie and Rande Cook — he started with jewelry-making and moving into multimedia art including printmaking, sandblasting and wood carving.

He soon became known for his mathematical, symmetrical art prints and in 2016, he had his first solo exhibit — a display called Sacred Geometry at Alcheringa Gallery.

“I am a big M.C. Escher fan, and I started studying all kinds of geometry from around the world,” he said, having looked at things like Islamic tessellations, Tibetan mandalas and Celtic knots.

“I was learning geometric principles from that and then seeing how I could use different things you might not find in Salish art traditionally.”

During his residency with the City of Victoria, Thomas will work with city representatives to produce a range of public works, which could include an exhibition or large-scale public pieces.

Thomas has previously done commissions for the city, including a series of banners from earlier this year that delve into four aspects of Lekwungen history and mythology, including one in honour of his great grandmother.

“I’m so happy that now I can really do the art that I want,” he said.

“(The residency) really gives you a lot of creative freedom and it’s a super exciting opportunity.”

As he continues his residency, Thomas also hopes to work with Indigenous youth in Victoria on design and to hold a workshop about stone carving.

“I think the effort to bring more Salish art into the city is a really good move, and it makes Salish people feel acknowledged.

“We’re from here and have a rich and deep history, I’m just really happy on so many fronts to see Salish art start to thrive again.”

More information about the residency and future events with Thomas can be found at www.victoria.ca.