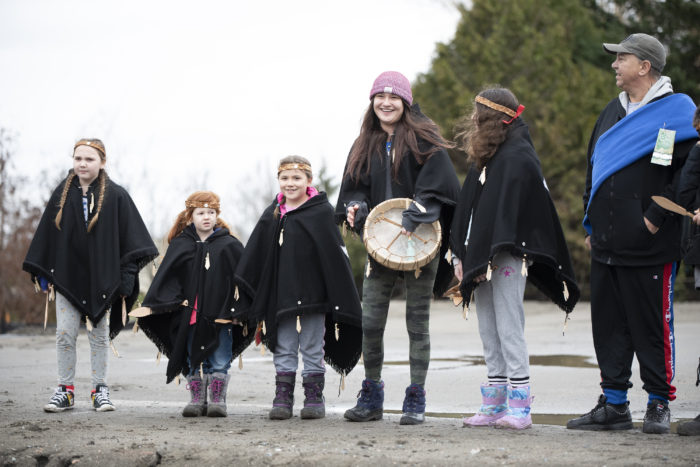 Above: TFN Chief Ken Baird, right, stands with a group of youth who were witnesses for the event on Jan. 24. Photo by Adrian MacNair.

Tsawwassen First Nation has broken ground on a new youth centre that will provide a space for children and teens to gather for years to come.

A groundbreaking ceremony was held at the site on Jan. 24, where youth witnesses were called and the lot was brushed with cedar.

The Canadian and B.C. governments are both partners in the project, which will be open to both youth from Tsawwassen First Nation and youth living on Tsawwassen lands.

Chief Ken Baird said the youth centre is another step in the ongoing implementation of Tsawwassen’s treaty.

He spoke about the importance of investing in the nation’s youth — who will be the ones to carry on culture to the next generations.

“Our youth and elders are an endless circle, our nation cannot have one without the other,” he said.

“Today we are here to honour our sacred traditions and ceremonies, and to … begin the groundbreaking of this important building.”

Plans for the youth centre include a longhouse-inspired design featuring carvings, paintings and student artwork etched in glass.

The 12,000 square-foot building will provide space for youth from K-12 to gather between and after class to participate in sports, cooking, music, counselling and more.

Baird said the project is expected to be complete by 2021.

“This project is very exciting,” he said.

“Probably within a year we will be back here again opening (the youth centre).”