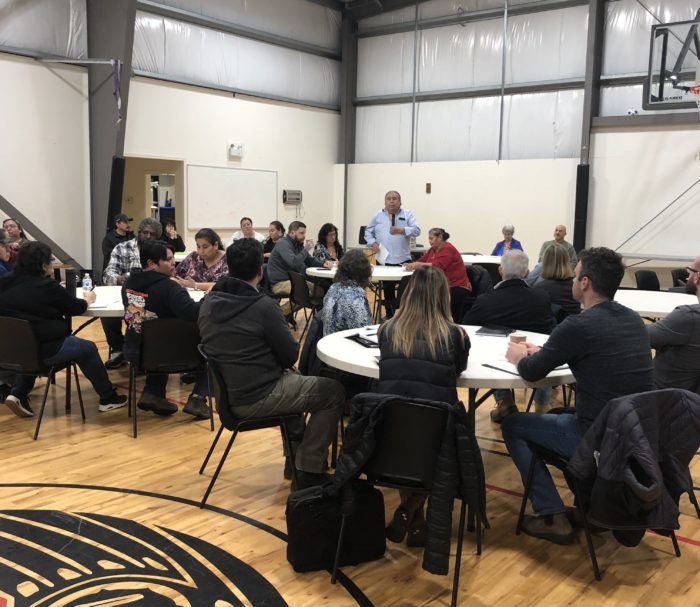 We are supporting each other in a time of crisis at Halalt First Nation after the community faced a devastating flood in the middle of the night on January 31.

As the water dangerously rose at 2 a.m., the North Cowichan fire department were first on the scene to evacuate people from their homes with nothing but the clothes on their backs as residential septic systems failed. A total of 121 residents were forced out of their homes. Fourteen basements flooded, and three homes have since been condemned.

The raised E&N railway line, according to Chief James Thomas, with only two culverts, made the situation even worse as the rising water had nowhere to go.  The flooding is nearly unprecedented — in some cases rising to several feet above the ground.

Now, when you drive through our territory, you will notice that there is a lot of work going on. Yellow, red or blue tags mark our homes as different levels of assessments have been assigned to each house for proper restoration. Workers protected by hazmat suits are moving from home to home filling huge bins. As hard as it is to see personal items be thrown away, we are thankful for the educated help in identifying tainted items, and grateful that everyone is safe.

You never know how people are going to react to such a devastating situation, but we have really come together and stepped up to help one another in this time of need.

Councillor Mikaela Whitelaw spoke of this, saying how people here have been leaning on one another — from knocking on doors to check on people, to cooking meals for the community or giving people rides when they need them.

“Nothing is easy in disaster situations and emotions run very high, but I’m proud of how Halalt as a nation has managed through together,” she wrote to the Salish Sea Sentinel.

“There is a long road ahead in order for our community to completely recover, but the strength shown through the worst of this situation gives me confidence that our nation will only grow from this experience.”

Councillor Pat Thomas added that the community has set up a “resilience centre,” which will be open for as long as necessary.

“Our community is so thankful for all the generosity and all the support that has been provided,” she said.

“It also has been an eye opener that much needs to be done in the event that another disaster happens.”

Halalt leadership wanted to thank the neighbours and outside community organizations who have helped out. Specifically: The First Nations Health Authority, the Hulhetun Health Society, Klahoose, Western Forest Products, the Salvation Army, Soap for Hope, Salt Spring Island and everyone else who has supported or made donations.

It is going to be a long road ahead, but Halalt will work together to recover from this devastating flood that is still affecting many of our family members and friends. We are grateful for all the support we have received so far.