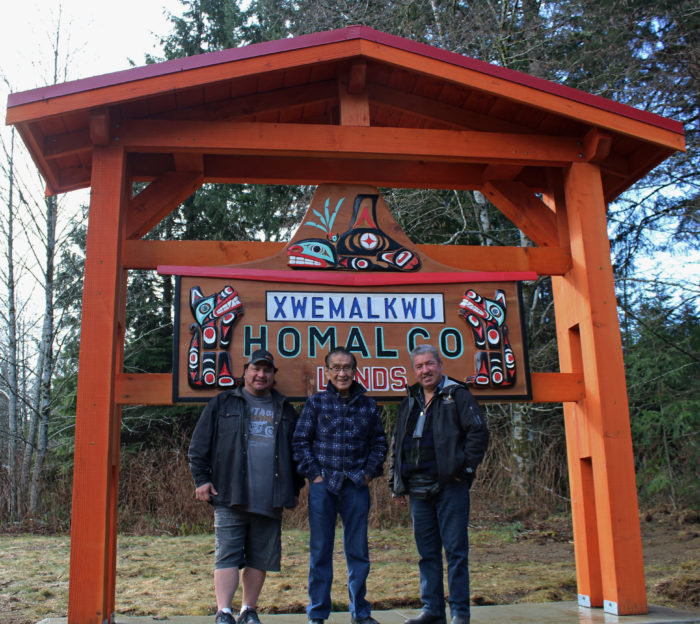 A long-awaited sign that marks Homalco’s territory and identity has been unveiled outside of the nation’s reserve near Campbell River.

The sign marking Xwémalhkwu (Homalco) lands was installed on the highway in late February.

It was carved by Elder Bill Blaney and Derek Georgeson with design guidance from Chief Darren Blaney.

Others from the nation also assisted with the process, Chief Blaney said.

“We’re the northernmost Coast Salish and I wanted the design (to reflect that),” he said. “We aren’t absorbed by our northern neighbours — we are distinct.”

Elder Bill Blaney said he recalls there was a discussion about putting up a sign more than 25 years ago, when Homalco was relocated away from Church House and to their current location near the airport.

“It never did happen,” he said. “So we just kind of dropped it.”

The idea was brought again to the surface recently, and took about two months to complete once everything was in place.

Prior to this sign, Chief Blaney explained, there wasn’t much to signal to visitors that they were on Homalco lands.

Now, the sign will change that for anyone visiting the community or passing by.

The sign includes a wolf design to reflect Homalco’s creation story, as well as a killer whale and cedar hat design to represent ancestors.

“I wanted something that was distinctly Homalco,” he said.