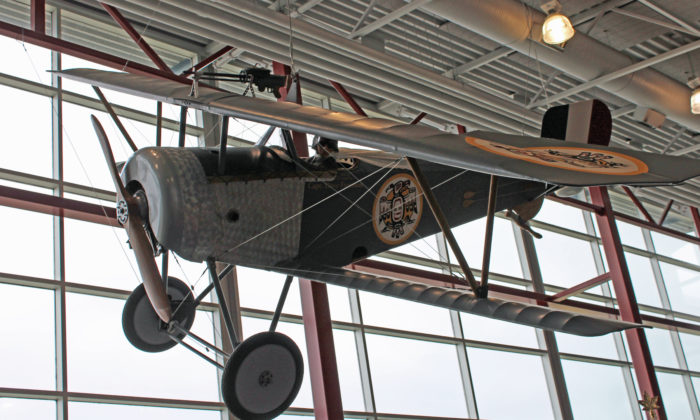 An airplane display that honours Indigenous veterans is now hanging at the Comox Valley Airport.

The “Plane of Reconciliation” project is a replica First World War Nieuport Biplane that was donated by the late Captain David Freeman — a longtime pilot who wanted to commemorate Indigenous veterans.

With his donation of the plane, Freeman had requested that the Comox Canadian Forces Base unit badge design to be added to the display.

The badge features a Kwakiutl Thunderbird design that was originally designed in consultation with K’ómoks Chief Andy Frank and Kwakwaka’wakw Chief Mungo Martin in the early 1960s.

The design was since recreated by Martin’s great grandson, Hereditary Chief “walas `Namugwis” David Mungo Knox for the Plane of Reconciliation.

Knox spoke during an event at the airport on Feb. 10, saying that the thunderbird is an important symbol for many nations across Canada.

“It’s one of the biggest crests amongst all coasts,” he said. “It’s just one that’s always recognized and respected.”

During the event, $13,500 in federal funding was announced for the Comox Valley Airport Commission in support of the project.

“I’m pleased to announce our support for such a meaningful commemorative project,” said Lawrence MacAulay, minister of veteran affairs and associate minister of national defence, in a statement.