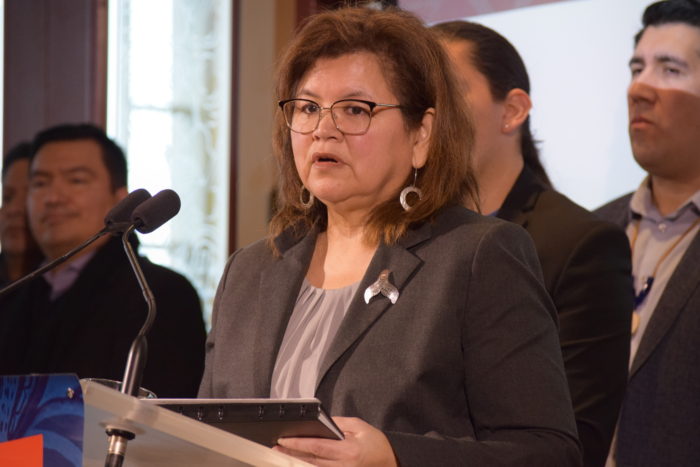 The First Nations who sued to stop the Trans Mountain pipeline expansion say they’re “disappointed but not surprised” by a major setback in court — and even before the ruling had already filed paperwork for the case’s final stage, at the Supreme Court of Canada.

Just days after three Federal Court of Appeal judges unanimously rejected the largest Indigenous legal challenge, the Crown corporation behind the project revealed its costs had ballooned from $9 billion to nearly $13 billion.

“As disappointing as it is … this is one step and only one step; we have far, far to go in this journey,” said Chief Leah George-Wilson, leader of Tsleil-Waututh Nation, one of the plaintiffs in the case, during a press conference Feb. 4.

The three judges all agreed that Ottawa had done everything it needed to do to consult with First Nations impacted by the pipeline, particularly after being forced to restart those efforts in a previous court case.

“This was anything but a rubber-stamping exercise,” the judges wrote, ruling that opposition to a project doesn’t mean First Nations can block it because, “as a practical matter there would be no end to consultation, the project would never be approved, and the applicants would have a de facto veto right over it.”

Chief George-Wilson said that means the new ruling will have wide-ranging effects beyond B.C. but affect “all Indigenous nations.”

The case was filed by Tsleil-Waututh and Sḵwxwú7mesh Nations, several Stó:lō bands, and Coldwater Indian Band near Merritt, B.C. They argued governments failed to adequately consult with them in their push to proceed with Trans Mountain’s expansion, despite harm to their traditional territories.

According to lawyer Bruce McIvor, with First Peoples Law Corporation, the court rejecting the those arguments was “no surprise.”

“The law on duty to consult has just become more and more of an ineffective tool,” said McIvor, who was not involved in the case. “If the court says they didn’t consult properly, sometimes the outcome is the government now has been given a roadmap on which boxes they can tick.

“Part of the irony is that it’s been Indigenous people who have taken all these cases to court for all these years, spending their time, energy and money — but when (governments) come back, they’re more than likely to get approval and get the benefit of the doubt.”

The pipeline has operated since the 1950s, but in 2017 the federal government bought it from Kinder Morgan for $4.5 billion and turned it into a Crown corporation, inheriting the plan to expand its capacity by nearly three times to 890,000 barrels a day from Alberta’s oilsands to its Burnaby terminal on the Salish Sea.

That would increase oil tanker traffic sevenfold through the traditional waters of the Tsleil-Waututh, Sḵwxwú7mesh and other nations — and they argue with that the risk of a catastrophic oil spill impacting the waters, fisheries and species they’ve depended on for millennia.

The Crown corporation says its project meets world-class safety standards, and that it has put measures in place to prevent and clean up any accidents. It says it has signed 58 benefit agreements with other First Nations, worth more than $500 million.

Its CEO said in a statement he was “pleased” with the ruling and that the court-ordered extra Indigenous consultation “represented an immense undertaking by many parties,” said Ian Anderson.

“After many years of consultation and review,” he said, “we are pleased to be able to continue moving forward and building the project in respect of communities, and for the benefit of Canadians.”

Previous lawsuits involving environmental groups and the cities of Burnaby and Vancouver were already thrown out by various levels of court, leaving the Indigenous-led case standing alone as the last legal avenue. The provincial New Democrat government, which was elected on a promise to use “every tool in the toolkit” to stop Trans Mountain, responded that it respected the court’s decision.

“It’s important for the Prime Minister and Premier, and all leaders considering their options on this, that there are a lot of people willing to do a lot to defend our coast and our communities,” said Khelsilem, councilor with Sḵwxwú7mesh nation. “It requires strength and courage to stand up to unjust laws.”

The nations behind the case had in fact already launched their appeal of the earlier appeals court decision against them last November, for which they are still waiting for the Supreme Court of Canada’s decision whether to hear it. They are still deciding whether to also challenge the new ruling as well.

“Our work is not done,” Chief George-Wilson said. “This is not going to stop us.”