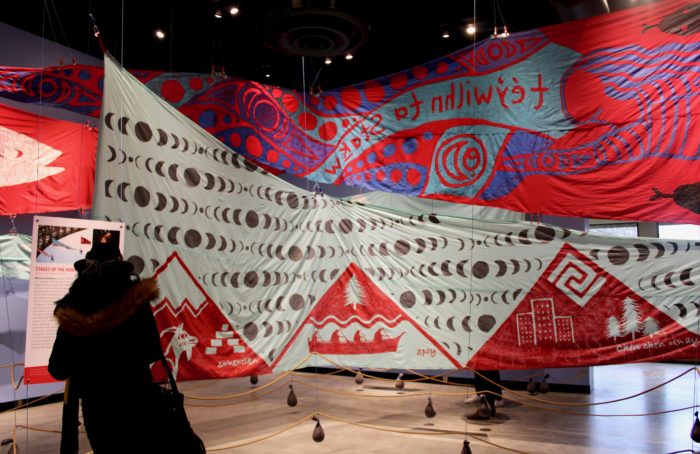 For months, seven painted banners languished in garbage bags in an RCMP evidence room as police considered pressing charges against 12 people who flew them while blocking oil tankers.

Now the banners are on display at the Museum of Vancouver — and for the artists who designed them, the exhibit is one way to keep telling the story of opposition to the Trans Mountain pipeline expansion.

Will George (Swaysən) designed one of the streamers and was one of the people who rappelled themselves from the Iron Workers Memorial bridge during the 30-hour action.

“Art … in our culture has always told the story,” said George. “From my experience we don’t feel like we have a voice anymore. The pipeline’s been approved, there’s nothing we can do, it’s how a lot of the younger people feel.

“So if I can help encourage, inspire as many as I can, that would be great.”

On July 3, 2018, the Indigenous and Greenpeace activists lowered themselves from ropes to hang off of Vancouver’s Iron Workers Memorial Bridge and stop oil tankers from plying the waters of Burrard Inlet.

Fluttering above each hanging protesters’ head was a banner designed by a different artist. George’s banner is based on the traditional Coast Salish tattoo design he has on his arm.

Marissa Nahannee (Maykw Cha7em) of Sḵwxwú7mesh Nation designed a streamer that depicts the phases of the moon, symbolizing “that we’ve been here for many generations, for time out of mind,” she said.

“In this new era of technology and people coming to our land, we’re once again faced with the challenge of saving our land, saving our habitat, and to do that we need to work with one another.”

Ed Archie NoiseCat’s banner is painted with a yin-yang design of two orcas; a black hand that trails the whales could also be interpreted as a trail of oil, he said.

The exhibition opened just one day after Canada’s federal court of appeal ruled against several First Nations, including the Sḵwxwú7mesh and Tsleil-Waututh, who had argued that the federal government had not adequately consulted with Indigenous people on the pipeline expansion.

It was one more setback in a years-long saga that has seen many First Nations, some municipal governments and environmental activists oppose the plan to twin an existing pipeline that carries oil from Alberta to an oceanside terminal in Burrard Inlet.

For the artists whose work is being displayed at the Museum of Vancouver, the fight is far from over.

“It just makes me all the more dedicated to what I’ve been doing, which I intend to keep doing until I die,” said NoiseCat of the court ruling.

Sharon Fortney knew as soon as she saw the blockade being live-streamed on Twitter that she’d like to include the banners in the museum’s collection.

“I was just really struck by the power of this action and how beautiful it was,” said Fortney, the curator of Indigenous collections and engagement with MOV. “It’s very rooted in territory and the local art traditions.”

When the charges being considered against the land defenders were dismissed and the nylon banners were returned to Greenpeace, Fortney approached the environmental organization to ask about adding them to the museum’s collection.

Museum staff then began the process of restoring the crumpled banners to their original glory.

The banners were created as protest art, and longterm preservation wasn’t top of mind when Greenpeace activists painted the artists’ designs onto ripstop nylon, Fortney said. That means the paint is now cracking, so the museum is trying to find ways to extend the life of the banners.

Nahanee said the collaboration with MOV is exciting and groundbreaking.

The exhibit will be on display until July.