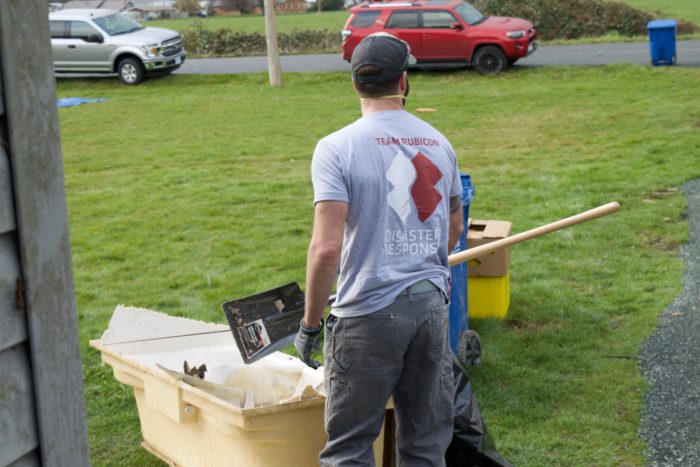 Flood-damaged homes at Halalt First Nation were being cleaned out with the help of a team of volunteers as recovery efforts continue for the Cowichan Valley community.

A group from Team Rubicon Canada visited Halalt on March 7 and 8 to help “muck out” three homes that were the worst damaged during a devastating flood that happened in the middle of the night on Jan. 31.

About 60 people from the 220-person nation were evacuated by boat and taken to a hotel after heavy rain flooded homes with, in some cases, chest-deep water, according to the Victoria Times-Colonist.

The damaged homes were assessed with colour-coded tags, with red being the more severe. Many have now been allowed to return to their homes since the flood, but recovery efforts continue.

Once they were able to assess the damage, the homes’ residents and other Halalt members worked to do the initial cleanup. Red-tagged homes were cleared out and stripped to the studs.

Scott Haig, a Disaster Response Unit administrator with Team Rubicon Canada, said his team of volunteers were sent to the nation after some communication with Halalt, Emergency Management B.C. and Indigenous Services Canada.

“We’ve only been in communication within the month, and so it’s been very quick,” Haig said.

On March 7, several volunteers in white protective coveralls were in the crawl space of Garry Norris’s house, taking out soaked pieces of debris and bringing them outside.

Next door, several others were scraping film from the linoleum floors.

“The house still stands, it’s structurally safe, it just needs to be cleaned out. Garry and his family have done so much work already,” Haig explained.

“A lot of what you see going on here is what we call a muck out. We’re just in the muck, getting stuff out and into the garbage.”

The volunteers from Team Rubicon Canada are based in Southwestern B.C. — the organization is fairly new to Canada, but known worldwide for utilizing military veterans and first responders to assist in disaster response.

“(This is) our first operation deployment in the area, B.C. has only just started when it comes to Team Rubicon Canada,” Haig said.

Miller also visited Cowichan Tribes to discuss the impact the flood had there.