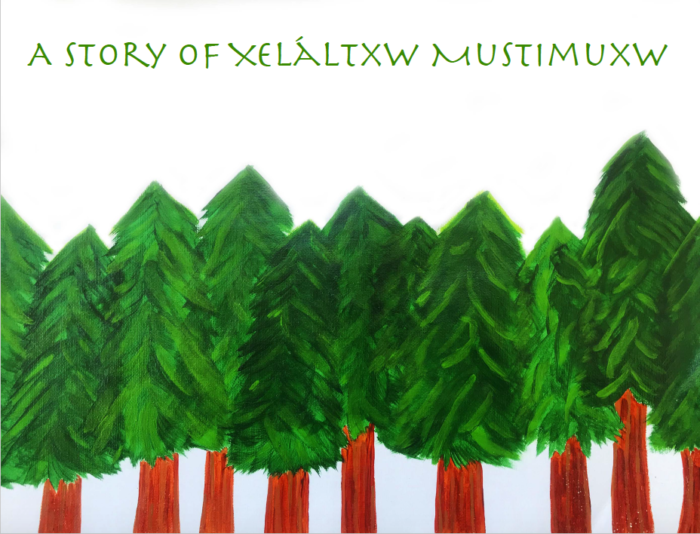 Post-secondary planning students at Halalt First Nation have worked with the community to create a children’s book.

The book titled A Story of Xeláltxw Mustimuxw was released to the nation after students Andrea Oakunsheyld and Phil Climie completed their practicum earlier this year.

They were part of a cohort from the University of British Columbia’s Indigenous Community Planning program who have completed work placements at various nations.

Those students and others who completed work at the Homalco and Qualicum nations presented their final work via Zoom on April 15.

“Each journey is completely different,” said Jesse Hemphill, an instructor with the program.

“By coming together … we’re able to learn from each other and learn from these different experiences.”

At Halalt, students Oakunsheyld and Climie began their work in September of 2019.

The nation already had a draft comprehensive community plan in place, so the pair helped the nation to round it out and to start to implement goals.

“A children’s book was actually one of their recommended actions from last year,” Oakunsheyld said.

Since she had previously specialized in children’s lit, and the book also fit into other community goals such as education and youth engagement, working on it seemed like an obvious choice.

The students met with elders to discuss stories and teachings which shaped the book. The story is told from the perspective of a little boy from Halalt who is sitting with his grandmother and hearing stories about the land.

“We started to see a narrative emerge and so we just started placing pieces together,” Oakunsheyld said.

“It ends with grandmother saying the lands and waters around Halalt have changed and are very different, but they’re also the same now.”

The book includes various Hul’q’umi’num’ words and was illustrated by Oakuncheyld and Climie.

Homalco started their planning process in mid-2018, led by co-ordinator Jeannie Hill. They partnered with UBC students Pearl Penner and Kate Davis to continue the work in September of 2019.

Because of COVID-19, the Homalco plan is complete but remains an early draft, and the students weren’t able to present their final work to the community.

“The biggest limitation we came up against was COVID-19,” Davis said.

“We were forced to cancel all all our community visits and engagements from March 12 onwards.”

The challenge was one that affected all the planning students in this year’s cohort — but Hemphill underlined the lessons that lie in having to adapt.
“This year has brought so much that is unexpected,” she said.

“I am so proud of this year’s cohort of Indigenous community planning students. … They’re prepared to go out into incredibly challenging scenarios.”