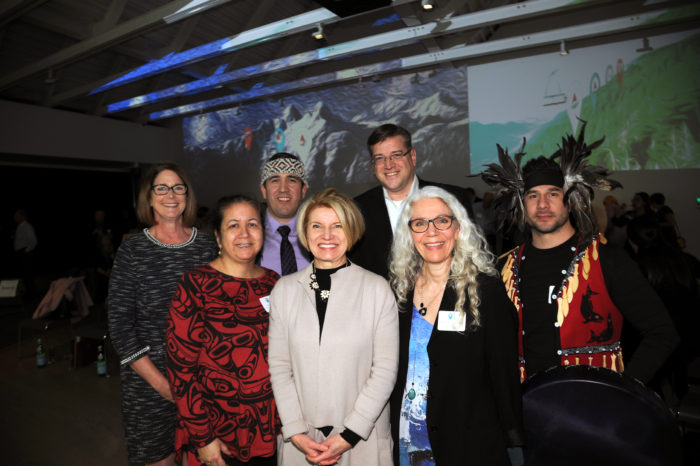 Above: A group of people involved in the North Shore Culture Compass, including representatives from Tsleil-Waututh and Sḵwx̱wú7mesh, at an opening event in March. Photo by Mike Wakefield.

A new online resource means people can learn about the North Shore’s Coast Salish culture and history from home.

The North Shore Culture Compass is a digital platform that catalogues various artistic, historic and cultural aspects of the area into an interactive map.

To create the platform, creators North Van Arts worked with various community partners including the Tsleil-Waututh and Sḵwx̱wú7mesh Nations.

“This is a tool where you can learn about culture in the safety of your own home,” said Nancy Cottingham Powell, the executive director of North Van Arts.

“It is a living tool and we knew that when we launched, that this is just the beginning. We’ve been working on this project for three years now.”

The Culture Compass first began when the organization received federal funding in 2017, and the tool was officially launched during an event in March, shortly before things drastically changed because of COVID-19.

An original intention of the tool was to encourage people to get out in the community, but until then, it means people can connect with the area’s culture from home, Cottingham Powell said.

It’s based on the widely-used concept of “cultural mapping,” meant to safeguard and highlight the cultural diversity in different areas worldwide.

“UNESCO recognizes that cultural mapping is critical in preserving both the tangible and intangible components that comprise a community,” she said in a statement.
“This interactive tool is a way to appreciate all the North Shore has to offer.”

The North Shore Culture Compass, created by Esri Canada, is divided into 10 sections that are based around a free submission process. The sections include: First Nations, Public Art, Cultural Spaces & Facilities, Intangibles & Stories and more.

The user can filter the map by category, and when a user clicks on a point on the map, they will find supporting information in the form of photos, text and relevant links. There are more than 400 listings in total.

For the First Nations section, North Van Arts worked with members of Tsleil-Waututh and Sḵwx̱wú7mesh to include traditional place names and the Coast Salish names of important animals that frequent different areas, both with audio pronunciations.

What’s seen on the map now, Cottingham Powell said, is “a great starting point” that will continue to grow and evolve.

North Van Arts has received funding from Canada Council for the Arts’ Digital Strategy Fund to continue the effort and plans to continue community engagement in order to include more information such as shareable cultural stories.

“We’re going to just keep feeding that onto the map and people can come back again and again and there will always be new stuff to check out,” Cottingham Powell said.

The tool can be accessed at northshoreculturecompass.ca, and submissions can be made via the website’s “getting on the map” section.