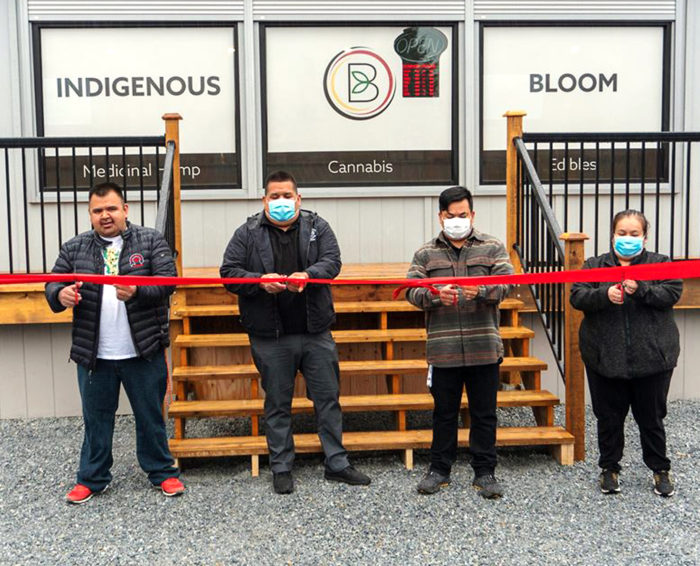 The public health emergency hasn’t stopped Malahat Nation from safely moving ahead with planning for the community’s economic future.

And with new measures and procedures in place to protect community members, customers and employees, the nation is confident of its next steps with its long-anticipated tourism project — the Malahat Skywalk — as well as unveiling an Indigenous-owned cannabis dispensary with additional COVID-19 safety measures.

According to Malahat Skywalk Corp., a series of discussions with the people involved in the project have concluded it can push ahead in healthy ways. The province of B.C. has allowed construction projects to continue throughout the COVID-19 emergency.

“The company has reviewed the current construction program, based on conversations with our suppliers and contractors, and is confident work can continue on site by employees, contractors and sub-contractors,” the Skywalk project’s builders said on March 23 — as the public health emergency was declared by the province — adding that all construction will carefully follow the WorkSafeBC and public health authority rules.

The announcement of continued construction work on the development came just over a year since the project was announced in 2019. The tourist attraction, when completed, will boast a 650-metre long walk through the treetops of the Malahat Nation’s arbutus tree forest, “leading to a spectacular gentle spiral ramp” allowing visitors to climb 40 metres to a panoramic sightseeing lookout over Finlayson Arm and the Coast Mountains.

“It will provide a stunning new perspective on beautiful southern Vancouver Island,” the nation said in a statement. The idea, they originally noted, was inspired by forest canopy walks popular with tourists in parts of Europe. The idea has also found success at British Columbia tourist attractions such as the Capilano Suspension Bridge’s own raised forest walk in North Vancouver.

Measures to protect health on the Skywalk project site include installing hand-washing stations at the job site, and “individual sanitation kits” to each employee, plus asking any employees who are sick to stay home and self-isolate for two weeks before returning to work, and staff who are able to do so to work from home. It’s restricting in-person workspaces to five people “in any circumstances,” and spacing them the recommended two metres apart to avoid infection by respiratory droplets.

And any sub-contractors are required to provide their own COVID-19 protocols before working on the construction site, which is being managed in partnership with Kinsol Timber Systems.

“The Malahat Skywalk site remains closed to the public and all unauthorized personnel,” the builders noted on March 23.

Other work on developing business opportunities for Malahat continues, with leaders of the community joining in a ribbon cutting ceremony at the Indigenous Bloom Corp. cannabis outlet’s grand opening in April. It is located in the Malahat Nation’s 55-acre Business Park, at 1800 Trowsee Road in Mill Bay, on the Saanich Inlet coastline.

“We are looking forward to serving the area, providing access to high quality, medicinal cannabis products,” announced the First Nation at the opening. “Congratulations to the Malahat community and Indigenous Bloom for the grand opening.”

The project’s staff and band leaders wore protective facemasks and stood apart as they proudly cut the ribbon on just the latest economic development opportunity being pursued by Malahat nation.

Products being sold at the dispensary include different varieties of smokable cannabis bud, as well as vape pens and concentrated cannabis items such as tinctures, honey infusions, full spectrum oil, hash, shatter and resin — plus popular edible gummies and hemp bath bombs for relaxation, handmade by the company.

Malahat is just the latest First Nation to take advantage of Canada’s legalized cannabis industry. Indigenous Bloom Corp. also has dispensary locations at Tsaycum in North Saanich — as well as on the B.C. mainland in White Rock, Penticton, Williams Lake, Osoyoos and Oliver.

Indigenous Bloom Corp. said it has put in place several safety measures to protect customers’ and employees’ health during the COVID-19 pandemic, including safe distancing markers on the floor, plexiglass barriers at the service counter, and only allowing two customers inside their locations at a time.

The company describes itself as a cooperative made up of Indigenous people and communities which form “long-term partnerships” with First Nations to grow, produce and sell cannabis products on their own land — in “an effective and controlled manner guided by health, wellness, and traditional values.”

It’s proving lucrative for a growing number of bands across the province.

The Malahat Nation during COVID-19 moved to an “essential services” approach, and on May 8 the band’s health team thanked the community for its understanding, support and everyone doing their part during COVID-19.

Posting on the Nation’s official Facebook page, the health providers noted “all your efforts of staying home and social distancing, as well as all the extra handwashing that we have seen happening” have protected the community from outbreaks seen elsewhere. “Stay strong, stay safe Malahat,” the health team said, “together we are getting through this!”