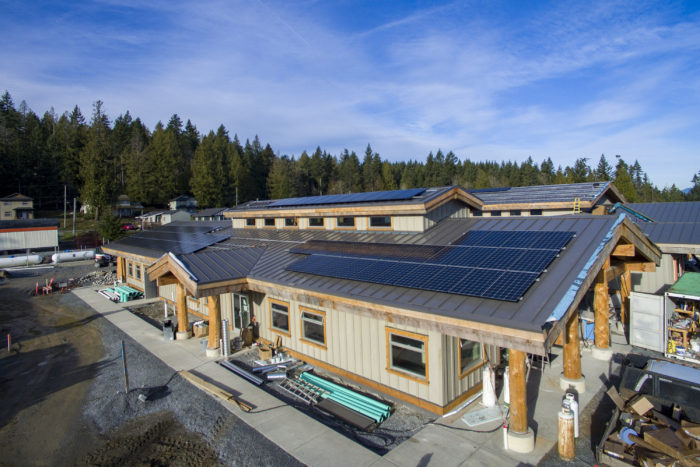 A recently-installed solar system at Malahat Nation is a first step as the community looks to a more sustainable future.

Solar energy is now being utilized in the nation’s new multipurpose centre and in the Kwunew Kwasun community building.

The 50kW photovoltaic system consists of 222 individual panels that are spread out between the two buildings.

It’s estimated that the panels will produce enough to pay for themselves over their 25-year lifespan while saving about 30,000 kg of carbon emissions.

Tristan Gale, Malahat’s executive director of environment and sustainable development, said the system was completed in February after the nation received $150,000 in funding from the Government of B.C.’s CleanBC intiative.

The Canadian-made panels were installed in partnership with the company Osprey Electric.

“It’s the first step for Malahat in moving towards energy self-sufficiency and green energy,” Gale explained.

Another part of that member-led push, he said, has been the community food gardens that Malahat has been expanding on since last summer, and members harvesting more traditional seafoods.

Gale is currently working on a 20-year energy sustainability roadmap for the nation as part of a Masters in Business Administration program at the University of Victoria.

As part of that plan, he said, Malahat is looking at various energy storage initiatives that will reduce their dependency on BC Hydro. The nation also has another application in to fund more solar panels on an upcoming build.

In the meantime, members and the public can track the progress of the current solar energy system online through an automatically-updating tool that tracks the amount of carbon emissions saved and the equivalent number of trees that would need to be planted to get the same result.

The numbers are available via www.malahatnation.com/about/solar and will also be shown on a screen in the multipurpose centre’s entranceway.

Gale said it’s starting a conversation about energy and sustainability for the next generation of Malahat members.

“One of the best things about this is helping people change their mindsets about energy,” he said.

“It’s not something that’s just magically available … you don’t want to take it for granted.”