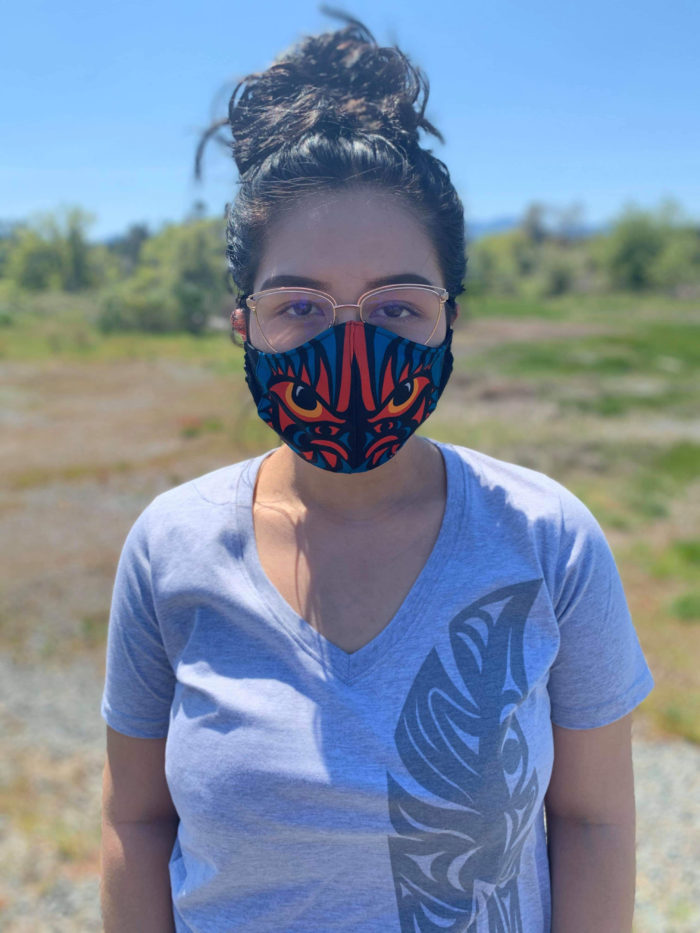 Above: Nadia Seward-Good wears one of the mask designs. Photo by Ay Lelum.

Two Snuneymuxw artists have joined a number of other Indigenous artists in Canada who are putting their own spin on face-covering masks aimed at preventing the spread of COVID-19.

The designers struck a partnership with the Vancouver-based manufacturer Oddball, which already works with Ay Lelum, to create the masks.

Aunalee Boyd-Good, who runs Ay Lelum with her sister Sophia Seward-Good, said Oddball had already been developing a mask, so the collaboration seemed obvious.

“(We knew) that people would start wearing masks and that we wanted to have our own designs,” she said.

“And we knew that Oddball’s masks had superior construction, they were three layers, they were made in Canada, and that was how we wanted to make them.”

The collaboration happened shortly after the Snuneymuxw declared a state of emergency in response to the pandemic on March 23 — prohibiting public access to their reserves, and setting up checkpoints and roadblocks to monitor traffic.

In early April, a design process was underway, and Joel posted his original eagle design on his Facebook page. The response was positive, and preorders began to come in.

“It’s kind of funny with social distancing. I made a gnarly design, you know what I mean? To keep people away,” said Joel of his eagle design.

It comes in two colour combinations — one in purple and grey, and another in blue and red.

Ay Lelum then added more options that featured William’s designs: one with killer whales and another that features roses and a hummingbird.

The Goods join other Indigenous artists locally and across Canada who are taking the opportunity to feature their art on face-covering masks.

The masks are non-medical but are meant to be worn as an additional layer of protection to prevent the spread of droplets from the mouth and nose.

“A new fashion accessory has arrived in the year of COVID-19,” reads a statement on Haida fashion designer and artist Dorothy Grant’s website, where she offers masks with a Raven and Hummingbird design. “It is a new world since the pandemic, and we don’t know how long this will continue.”

Vancouver-based design house Chloe Angus is also featuring masks in a variety of Indigenous designs, with partial proceeds from both companies going to various charities.

Joel and William Good’s masks can be purchased at aylelum.com or directly from the artists, with a percentage of the proceeds going to a local non-profit.