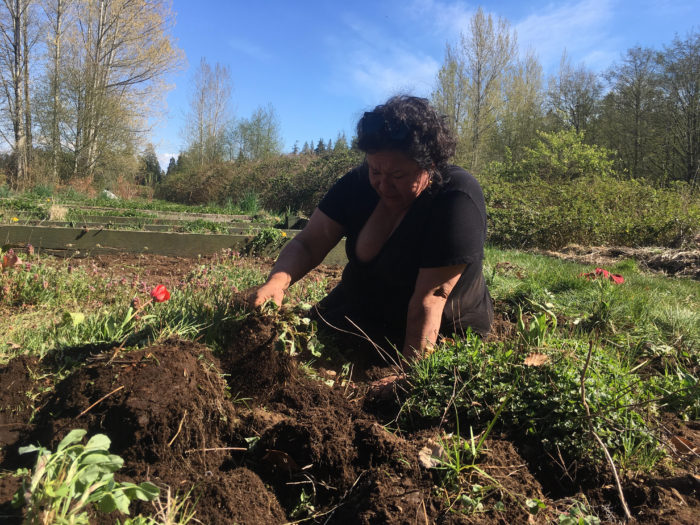 Photo: Led by mentor Kim Haxton, a small crew from IndigenEYEZ works to prep the beds for planting.

The Tu’wusht Garden Project is an Indigenous-led food security initiative at the University of British Columbia. Named in the Tla’amin language, Tu’wusht means “we belong” and is a space for urban Indigenous people to grow and share food. For a few weeks in mid-April, I joined mentor and former garden co-ordinator Kim Haxton in prepping the land to be planted for the 2020 growing season.

Bicycling through the precipice between campus and the UBC Farm was once a more therapeutic affair, one in which large cedars shaded, cushioned, and hugged fully the 24-hectare farmlands on the UBC endowment lands located on the unceded ancestral territory of the hən̓q̓əmin̓əm̓-speaking xʷməθkʷəy̓əm (Musqueam) people. Now, encroachment is sonic, it is visual, and it is jarring. As construction workers build community living spaces right up until the gate of the entrance, the farm is spatially safe from further encroachment. Yet, in a moment of economic precarity, and in a time when large human gatherings are prohibited, COVID-19 and its encompassing consequences prompts a deeper consideration about the importance of urban agriculture as a source of food, as a space of interspecies connection, and as security on multiple fronts.

In the ever-presence of uncertainty that COVID-19 has brought into our daily lives, there is certainty in the budding alders, sprouting rose shoots, and last year’s kale supply. Now, more than ever, we turn to the land for security, for certainty, and for social companionship. Here at the UBC Farm, we keep a few rows apart and work together as a small team to plant for the Tu’wusht Garden Project. Typically, the Tu’wusht Garden Project brings elders and youth from Vancouver’s Indigenous community of the Downtown Eastside to connect with each other, connect to land, connect to knowledge and embody the “seed-to-plate” concept in food production and consumption. The Vancouver Native Health Society program used to operate under the name “the Urban Aboriginal Community Kitchen/Garden Project” when it began in 2005. It was given the Tla’amin name “Tu’wusht” by the late Elder Corrine Mitchell in 2013.

While the labour force of the Tu’wusht Garden Project typically transports program participants from the DTES to the UBC Farm, COVID-19 presents challenges for the growing season within the half-acre garden plots. This spring, the plots are laboured by a small group of volunteers knowing that one day its program community will return. One way or another, we retain the essence of place and maintain its function as a sanctuary within and away from the urban complexities.

The space is medicine and sustenance. With medicinal plants emerging in the frenzy of spring spouts, shoots, and growth — the years of compounded knowledge from a broad array of community participants is evident by the multiplicity of food and medicinal plants embedded in the soil. Carefully, we weed the garden while transplanting the medicinal plants. We converse about which plants from our respective homes and territories are anti-viral, anti-bacterial, and which are important for respiratory function. As a childhood asthmatic from the Syilx Nation, Mullein has been an important plant for aiding my respiratory function. I carefully transplant their new growth into their own space within the garden. As we re-organize the space for the 2020 season, we retain the function of the garden as a space to feel belonging in a time of social distancing and urban quarantine. We share and cultivate our knowledge, and we hold the space true to its intent as a space for DTES community members to rely on. We anticipate the importance of medicinal plants in the wake of a global pandemic, and emphasize the importance of how this knowledge has been passed on to us both individually and collectively. The many seasons of program operation have left their mark by nurturing productive soils. The soils carry the teachings of past and present community knowledge keepers who have brought their own medicines to the circle. In that, we are grateful for continuance in a time when interruption takes precedent.

In years past, I remember spending time with elders from throughout the Coast Salish world and beyond during my undergraduate experience at UBC. Peeling fresh shoots, sharing medicinal knowledge, and talking about worms, we weeded the farm plots for the coming harvest season. Those interactions with the garden drew knowledge and health from the depths of land into the pulse of community. Learning outside of text and pages re-opened my understanding of the importance of such a space on campus. The UBC Farm was more than a space of food production, but one of academic pedagogical freedom and experimentation. Teaching in this way reflects the ways of our elders from a deep past, to our contemporary urban reality. In these times when it is difficult to gather without the intermediary of screens bearing glitchy video chat apps, those organic embodied expressions of relationality are emphasized in our interactions with land. Farming, gathering, or observing — these actions fulfil a form of social importance that emphasizes how our communities are interdependent.

While the UBC Farm has cancelled its programming, workshops, and gatherings until June 30th in conjunction with UBC COVID-19 guidelines, spaces like it remind us that the land is one of our primary teachers and caregivers. With the coming of the academic semester, and Provincial Health Officer Dr. Bonnie Henry’s new phrasing of “few faces in big spaces,” we consider the importance of the natural world as a container for our learning environments. In some sense, this time of social distancing is an opportunity to explore and strengthen our relationships with place, land, and the myriad of life that surround us on a daily basis. As air traffic is erased from the skies, the stars become visible throughout Vancouver; these are the natural markers of our generations to remember where we are and how we are. In terms of education and community planning, I believe the land is speaking to us in these times, reminding us of the importance of spaces like the UBC Farm in the ever-expanding urbanization of the Coast Salish world at the mouth of the Fraser River.

In 1911, the UBC Farm was planned to occupy the majority of campus at approximately 200 acres with designations as farmland, agronomy, horticulture, and animal husbandry. In 1974, the current space of the farm saw the opening of a state-of-the art Dairy Barn located in a “room in the forest.” In the late nineties, the current farm space was reimagined and restructured into what it has become today. The space and programs grew in the subsequent decade to about 150 projects by 2011. While in 1997 the UBC farm saw potential designation as a “Future Housing Reserve” the threats to the farm space persisted and came to head in 2008 when the pressures of market housing were ever present. An on-campus movement branded as “Save The Farm” mobilized students and allies to cumulate 16,000 signatures to be delivered to UBC President Toope in October of 2008. In 2009 there was a celebratory march from the now old UBC Student Union Building to the UBC Farm to mark the efforts of the farm community to preserve its importance as an academic and sustainability resource.

Today, the urban encroachment is visible, audible, and felt. As global forces reshape our immediate surroundings, this moment of economic precarity and unstable food security reminds us that spaces like the UBC farm are vital for our urban ecosystem.

Skayu Louis is a youth camp facilitator and is in the Indigenous Politics program at the University of Hawai’i. He is from the Syilx Nation.

‘A difficult decision but the right one’: Tribal Journeys prep shifts from Snuneymuxw to Tla’amin in 2021