Kus-kus-sum: K’ómoks estuary set to be restored after decades of industrial damage 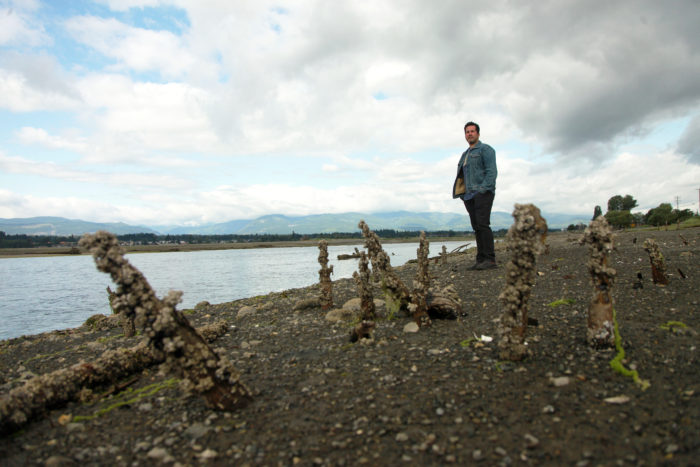 Beside the Courtenay River in K’ómoks territory, an abandoned sawmill site interrupts what would otherwise be a picturesque waterside scene.

A chainlink fence marks the entrance to the 8.3-acre weed-strewn concrete lot — littered with trash, a derelict office building, and marked up with graffiti.

The concrete is buttressed by a corrugated metal wall along the river bank, which has become an obstacle that has decimated local salmon populations.

The sawmill that once operated here started up in the 1940s, and changed ownership several times until its final owner, forestry giant Interfor, shuttered it in 2006.

Now, a partnership between the City of Courtenay, K’ómoks First Nation and the environmental non-profit Project Watershed means that the site could soon be restored to its former glory as an estuary.

The three parties have been raising funds to buy the property back from Interfor in order to “unpave paradise” and eventually transfer full ownership to K’ómoks.

For the nation, the area where the estuary sits is at the heart of their territory and history — known as Kus-kus-sum.

Not far downriver from the former industrial site, Andy Everson, a K’ómoks artist who lives near the waterfront, walks to the estuary edge in the morning.

At low tide, he navigates a maze of wooden stakes emerging from the tidal mud.

They’re ancient fish traps, once wrapped in wooden latticing — the oldest estimated by archaeologists to be up to 1,300 years old, he said.

“It shows how strongly connected we are to this place,” Everson said.

“Our people are literally rooted to the ground in this estuary.”

Growing up, Everson recalls staying at his grandmother’s house — which he now lives beside — and going across the road to the beach to play.

“As a teenager I’d go there every day,” he said. “It’s a real sense of place and home, when I look out across the home and see the beach and the mountains, it’s where I belong.”

Wedlidi Speck, who is Kwakwakaʼwakw and K’ómoks, said the estuary itself is being called Kus-kus-sum, but that name actually refers to the surrounding area.

Traditionally, Kus-kus-sum was used not only as a fishery but as a traditional burial site.

“My sense of it knowing Kus-kus-sum … it has to do with the relationship the ancestors had with salmon and how they prepared salmon on the beach,” Speck said.

“How they rendered parts of the salmon, over a period of time, when salmon is decaying it turns to oil.”

Everson said utilizing the traditional name is important because it means honouring the long Indigenous presence on the land.

“I hear complaints from settlers: ‘How can they change this name?’ Yes, how could they have changed the name?” he said.

“For us, it’s really symbolic to show — you can look at our people’s history through our fish traps or our middens — but these place names are also markers of our territory.”

Courtenay Coun. Doug Hillian said if and when the site is bought back from Interfor, the initial ownership will be joint between the city and K’ómoks nation.

“The plan is, over time, K’ómoks will become the full owners,” Hillian said.

The city is getting involved, he said, because municipalities are specifically eligible for various grants that could help pay restoration costs, and it has more capacity to provide maintenance and upkeep.

The city and nation are currently working on a Memorandum of Understanding that will outline how the site will be managed once ownership is transferred.

“We support our First Nations partners to strengthen their culture, their economic base, their governance,” Hillian said.

“To take their full position as not only participants in this life that we have together but as leaders. They have a rich tradition we can all learn and benefit from.”

Hillian first moved to Courtenay in 1979. He recalls the sawmill as being a significant employer in the community. But its benefits came with massive environmental damage.

Aside from industrial pollution and debris from logging industry activity on the river, mill site operators erected a 440-metre corrugated rusty metal wall along the river banks.

“The construction of the wall along the edge of the mill just became a dreadful obstacle for the fish,” Hillian explained.

“They actually call it ‘the Killing Wall.’”

The name was given to the wall because of how seals effectively utilize it to prey on salmon. As the salmon pass, they have nowhere to hide as female seals line their babies up along the wall, then chase the fish directly into the young seals’ mouths.

When the concrete is torn down and wall removed, the estuary and fish habitat can be restored — which will help the salmon to again start to thrive in the Courtenay River.

“Kus-kus-sum holds important cultural significance for our nation, and we look forward to its return,” she said in an earlier statement.

The estuary also holds immense ecological significance, as the meeting — and mixing — point between saltwater from the ocean and freshwater from the mountains. Salmon and other fish depend on this unique and vibrant habitat at key stages of their lives, explained University of Victoria fisheries biologist Dr. Francis Juanes.

“Because of the exchange of salt- and freshwater and nutrients, there’s a lot of food to be had there,” he said.

Additionally, many salmon depend on the often-murky estuary waters to hide from predators such as seals and larger fish, whether those salmon are ones that merely pass through on their way to spawn, or a few species that spend their entire lives there.

Juanes said the growing number of such efforts to restore and reclaim estuary lands from development are a sign of changing times.

“I think we’re more aware of the importance of estuaries today,” he said. “Restorating habitats to their natural state — as long as it’s done well and in an ecologically relevant way — I think is always a good thing.”

The plan to restore Kus-kus-sum, according to Project Watershed, would start by removing concrete and contaminated soil from the sawmill site.

The organization’s biologists would then create an “engineered wetland” of ponds and water channels to the nearby marsh.

Estuary biologist Dr. Colin Levings, a retired Department of Fisheries and Oceans scientist, remembers visiting the Courtenay sawmill site — and said he strongly believes restoring it as a thriving habitat for salmon and other species is both possible, and worthwhile.

“Wherever people want to bring something to the ocean for trade or industry, in many cases the estuaries are where that happened,” explained the author of the authoritative Ecology of Salmonids in Estuaries Around the World: Adaptations, Habitats and Conservation. “There’s quite a body of evidence showing they can be restored quite effectively, with attention to the science of each particular estuary and species.”

He cited several “very thorough” scientific studies of the Courtenay River estuary itself, particularly as a salmon habitat — as well as similar research across the B.C. coast that suggests there’s reason for optimism.

“There’s a good chance for success in my view,” the University of B.C. adjunct professor said of the Kus-kus-kum project. “Studies have shown that, as soon as the dyke, road, or steel sheeting is breached, the salmon will actually start to come in over the next couple of tides even.”

Juanes agreed — saying that even in places where fish populations have been decimated, it’s possible to bring them back.

“Generally, if you provide good habitat, fish will come,” he said.

“Sometimes the new systems don’t have the plants they used to have, or the water is much clearer than it used to be which doesn’t protect fish as well from predators, but these systems can be restored.”

Caila Holbrook, Project Watershed’s manager of fundraising, outreach and mapping, said fundraising to restore Kus-kus-sum began in 2017. So far, more than $2.7 million has been raised and Project Watershed expects the property will be officially bought back from Interfor with a final $1 million payment later this year.

Then the restoration work can begin, which will require millions more. The total cost to purchase and restore the site is estimated at $6.5 million.

Holbrook said Interfor has worked with them in a good way — allowing the community ample time to raise funds for payments.

Community members have worked with the three partners to raise money and there has also been some government assistance — the province awarded the project a $1 million grant last year.

“We’ve had over 2,000 people from the community donate money, time and resources,” Holbrook said.

“As soon as we purchase it and own the property … it should take about four years (to restore).”

The original plan was to make the final payment to Interfor in July, but COVID-19 has caused delays. When the final payment is made, a cultural event will take place at K’ómoks around the same time, highlighting the significance of, and relationship to, Kus-kus-sum.

“It’s been a longtime coming but it’s very exciting and we just have a little ways left to go,” Holbrook said.

Reporting for this article was made possible thanks to a grant from the Institute for Journalism and Natural Resources (www.injr.org).

What is an estuary?