Hands Raised to Tla’amin People and Their Treaty

It is difficult to sum up all the work, the joys and the heartbreak that led up to April 5 for the Tla’amin people and their treaty. The many stories from decades past could fill a book, not just this magazine. 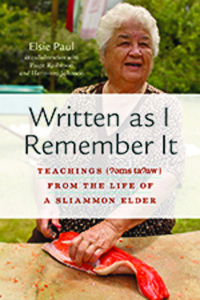 Of course, part of the book has already been written, by the nation’s elder Elsie Paul who penned the powerful memoir Written As I Remember It: Teachings(??ms ta?aw) from the life of a Sliammon Elder.

Her book is a story not only of personal survival, but also the survival of a culture and a nation. Treaties are about many things, from nation-building to law-making and from community planning to economic development.

But all those things, and treaties themselves, are essentially about reconciliation. Valid nation-to-nation relationships between Aboriginal peoples and theCrown was one of the tenets of the final report of the Truth and Reconciliation Commission last year. But reconciliation really only works on a person-to-person basis.

All the government policy decisions in the world won’t stop racism or nurture feeling of equality between peoples. That is why it was so heartening to see what happened at the new Powell River public library just weeks before the treaty-effective date at Tla’amin.

A special ceremony was held at the historic Dwight Hall to honour Elsie Paul’s many contributions to the community. And then it was announced that the new library would include the Elsie Paul Literacy Centre.

That is the sort of reconciliation we’re talking about here – real, significant and lasting recognition of the Coast Salish people, their culture and values that have survived around the Salish Sea since time immemorial.