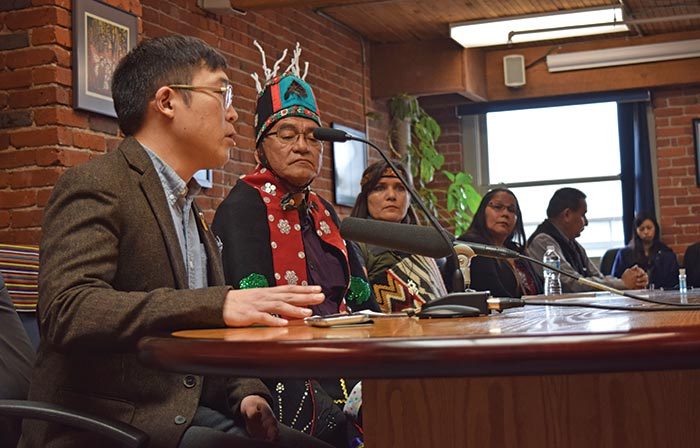 The Kinder Morgan pipeline expansion is illegal under Tsleil-Waututh—and other nations’—unextinguished traditional laws.

But the project has gone forward regardless because First Nations’ pre-colonial laws often don’t get recognized by governments and courts in broader society.

Now, one Vancouver law firm is helping B.C. First Nations to stand up their laws in a colonial context to protect their territories and rights.

The team has worked with six First Nations over the past year and will soon announce a second cohort that will begin later in 2017.

“We start with the belief that Indigenous law is real law, it’s law like any other law, and it really needs to be used,” she said. “The great thing about law is it’s always changing. Sometimes the change is really slow but it always changes with the times.”

“A lot of communities are really concerned about things like water, worried about pipelines, and have real concerns about the environment,” Matilpi said. “So what we’re doing with this project is trying to get at principles of Indigenous law that can be used for environmental decision making.”

One of the communities, Tsawout First Nation, has been drafting legal principles from more than 100 community stories.

Another, Fort Nelson First Nation, is using their traditional law as a foundation for a new water policy.

The effort is part of a larger push by West Coast Environmental Law to see Indigenous laws recognized.

One of the firm’s lawyers Eugene Kung works with Tsleil-Waututh Nation’s anti-pipeline initiative the Sacred Trust, and has utilized Indigenous law when fighting the project.

“We know that many First Nations here locally have made this project illegal,” he said at a press conference on May 1.

“It’s going to be up to the courts, in many ways, to try to distinguish these things.”

More information is available at www.wcel.org.