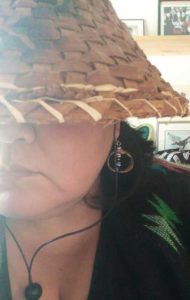 But then someone had realized that it was a neighbouring Coast Salish canoe, and announced it was one of their brother canoes. Everyone went down to the beach to greet the fellow Coast Salish men. One man from the canoe had announced his chief was coming to select a wife and to get all the single women ready in a line.

All the single aunts, cousins, sisters, daughters, and nieces rushed home to get ready and put on their finest clothing and fixed their hair and came back down to the beach. They were all lined up looking oh so beautiful. But at the end of the line there was a lady that had only one eye and had not been as beautiful or as well dressed as the other ladies in the lineup. All the women were all looking at one another, checking each other out. Some of the ladies had asked why she was in the lineup, telling her she was homely, only had one eye and that he would never choose her. The ladies laughed as each had teased her. The woman stood at the end of the line with her head hanging down and crying. The chief had pulled up and got out of his canoe and went to the front of the line and said, “Oh what a fine beautiful woman you are.”

Then he moved to the second woman in line: “Oh so beautiful,” then moved to the next lady and said, “Oh this is going to be a tough choice in finding a wife when all these women are so beautiful.”

Eventually he had gotten to the end of the line and saw the woman who was sad and looking down. He lifted her chin up and looked at her, and could tell she had been crying.

“I will take this woman as my beautiful wife,” he said.

He had known deep in his heart that the other women must have said mean things to this woman. An elder that was there that fine day long ago had said “she will make his finest wife and she will take such great care of him.”

Celestine is a published writer/illustrator who considers herself very fortunate to have learned some of the rich stories of Coast Salish territory from her elders. She can be contacted at celestinea@snuneymuxw.ca.

$13.5 million for Indigenous students at VIU