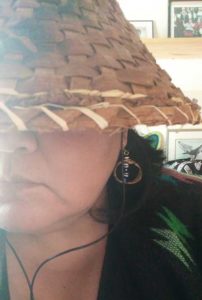 There are many versions of this story I have come across and this is the one I could grasp. This is Spencer Point’s version of Snake Island:

Long ago, and still today, our grandparents had taken the first grandchild that was born and raised them with all our snuw’uy’ulh: all our teachings. Well, this one set of grandparents was raising their granddaughter. She would wake up have breakfast, do her chores and then get teachings before she would go out and play all day.

So that morning, the granddaughter woke up and had her breakfast, got her teachings and finished her chores and went out to play. Two long houses away the older girl had been waiting to follow her seen her come out of her longhouse and began to follow the granddaughter.

“Your granddaughter is at the mouth of the river playing with snakes,” the girl said.

The grandmother was so worried and upset that she was doing that, so when the granddaughter got home she had asked: “What are you doing?”

“You must play with your own kind you cannot play with snakes, that’s wrong, that’s bad! No more,” the grandmother scolded.

The granddaughter said: “No grandma, please, they are my friends, I love them and they love me. We play every day.”

The grandmother replied: “No, you cannot play with them.”

The granddaughter didn’t listen. She would still sneak away to the mouth of the river and play with the snakes, and as time went by and she had gotten a bit older, she began dreaming of a tall dark figure with red eyes, and the granddaughter’s stomach began to grow.

Her grandfather would ask her: “What happened? Who did you sleep with?”

But she was too young to understand what he was asking and that he had thought she was pregnant. But because she wasn’t married back then, she had to leave the village. The grandfather had taken her onto the canoe and went out past Saysutshun and left her on the island that is called Welhqi:um (Snake Island). He went back home and the grandmother kept asking where he took their granddaughter, but the grandfather wouldn’t tell her until she got upset. When he finally told her, the grandmother got onto her canoe and went up to Welhqi:um. She saw her granddaughter and told her to come down to the canoe, but the granddaughter’s big tummy was gone, the island was covered in snakes, and she couldn’t move.

Grandmother rushed home and told grandfather about what had happened. He told all the men to go home and get their knives—they were going to save granddaughter. All the men got into their canoes and went to Welhqi:um and jumped out their canoes and began to cut the snakes. There were so many snakes that the men couldn’t keep up, so grandfather told them to build a fire on the island and to tell granddaughter to jump over. So they did, and she jumped over and was OK, but to this day, if anyone ever goes to Welhqi:um, the snakes look like they are cut in half and have no tails.

Our Snuneymuxw First Nations had fished for blue backs, lingcod and even seal back in the day on Welhqi:um, but once it became Snake Island our people couldn’t fish there, for anything
caught near the island is bound to have snakes in its tummy.