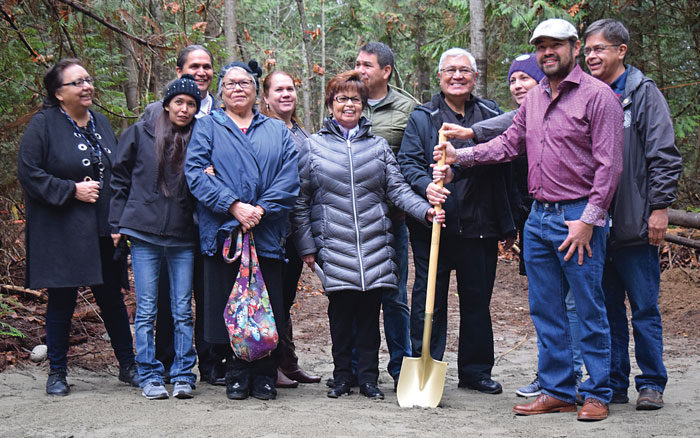 A huge new health centre that’s now being built at Snuneymuxw First Nation is the culmination of about two decades of work inside the community.

The multimillion-dollar, 780-square metre centre is being constructed on the community’s land in Cedar. It will allow the community to move out of its current facility which is too small to service everyone’s health needs.

The new centre is expected to be large enough to serve both Snuneymuxw and the wider community. It’s set to be completed by December 2018.

During a groundbreaking ceremony on Nov. 29, longtime former health director Sandra Good was acknowledged for her vision and hard work around the project.

Before she retired a couple of years ago, Good put many years into planning the new centre and working with government organizations to find funding.

Good said she is honoured and excited that the project is finally becoming a reality for her community.

“We just kept on and on, with the help of the chief and the council, to make sure that we have this new health centre,” she said. “We’ve outgrown (the current) health centre now and we have to improve the quality of healthcare for our elders and for our community. And that’s what we’re going to do.”

An artist’s rendering of the new health centre.

Current plans for the health centre include outdoor gardens, an elders’ room and the utilization of traditional medicines along with Western healthcare. There are also talks around a pharmacy, a lab and a dental unit.

The buildings’ architecture is being handled by David Nairne and Associates, and Built Contracting is overseeing contruction.

Current health director Charles Nelson, who has been working with Snuneymuxw for the past three years, said community talks around the centre officially began in 2015.

Though the project was in the works for much longer, Snuneymuxw was waiting on the federal government to transfer its health services in B.C. to the First Nations Health Authority, which happened in 2013.

“When they built the current health centre they received the funding and they built it, and it was already too small for the needs of the community, and Health Canada, at that time, knew that,” Nelson explained. “That was a reason to move forward to where we are today.”

Nelson said knowing that the larger health centre is in the works has allowed Snuneymuxw to start physician services last January and a Chinese medicine in April.

“We’ve done a lot of work in not even one year,” he said. “It’s taken a lot of support and a lot of insight, concerns and hope for the community for this to move forward today.”

Snuneymuxw Coun. Regan Seward said in a statement that the community, particularly its elders, had a strong vision for the new health centre.

“After all these years, our people deserve this,” he said.

What’s next for Snuneymuxw soccer legacy?