Before Tsleil-Waututh Elder Leonard George passed away in December, he had a vision for his people to build a Coast Salish watch house in their territory near Kinder Morgan’s pipeline route.

On March 10, that vision became a reality when Tsleil-Waututh members oversaw the completion of Kwekwecnewtxw (a place to watch from) on Burnaby Mountain near the Trans Mountain Pipeline route.

Kinder Morgan is set to triple the capacity of its existing pipeline from Alberta to Burnaby, in a $7.4 billion expansion that would increase tanker traffic in Tsleil-Waututh’s backyard by sevenfold. 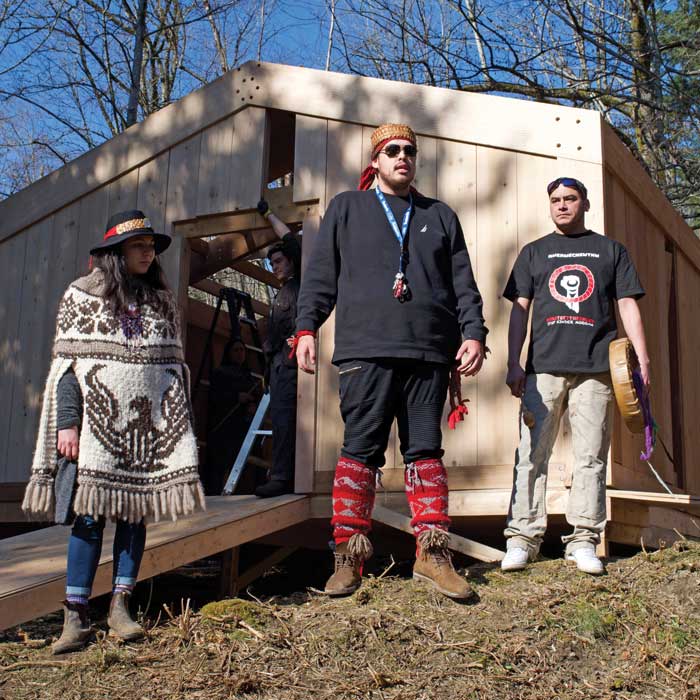 Tsleil-Waututh members, from left, Ocean Hyland, Cedar George and Will George, welcomed a group to visit the new watch house.

Tsleil-Waututh member Rueben George said that when Leonard passed, people from the community decided to carry on his goal of building the watch house.

“It’s not a ceremonial house like a longhouse, it’s a watch house where we would traditionally watch for our enemies, and that’s what we’re going to do,” he said. “It represents the elders stepping forward and protecting the lands and waters and instructing the warriors of how to be and how to protect.”

While the house was being built by a crew throughout the day on March 10, up to 10,000 people marched from Lake City Way station in Burnaby up the mountain to the watch house, to show their opposition to the pipeline expansion.

Indigenous leaders attended from across Turtle Island as well as political leaders, environmental leader David Suzuki, and countless other key figures in the Kinder Morgan fight.

Tsleil-Waututh member Cedar George-Parker, Rueben’s son, said he felt heartened that everyone is standing together against big oil.

Tsleil-Waututh’s Burrard Inlet has already been ravaged by pollution and is only now starting to recover, and community members have repeatedly said they cannot risk an oil spill that’s “not if, but when.” 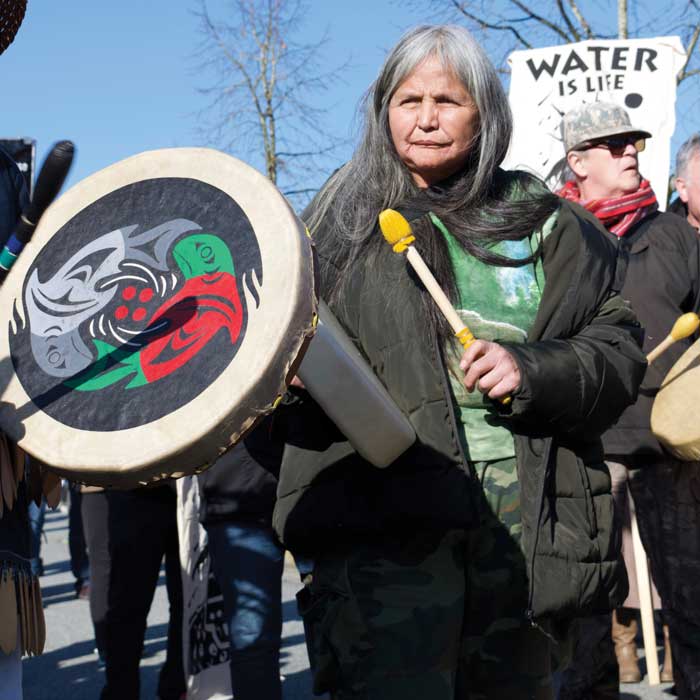 “We’re here to protect, and to talk for, the animals, the ones who cannot speak,” he said. “We have to be extra strong not only for us, but for the things we share this world with.”

She said the tar sands have “ravaged, contaminated and broken the spirit” of people in Alberta.

During the day, people were encouraged to sign up to receive updates about future actions against the pipeline, and to agree to cross police lines when the time comes, by texting ‘ready’ to 522-67.

More information can be found at www.protecttheinlet.ca.

Our youth, our future