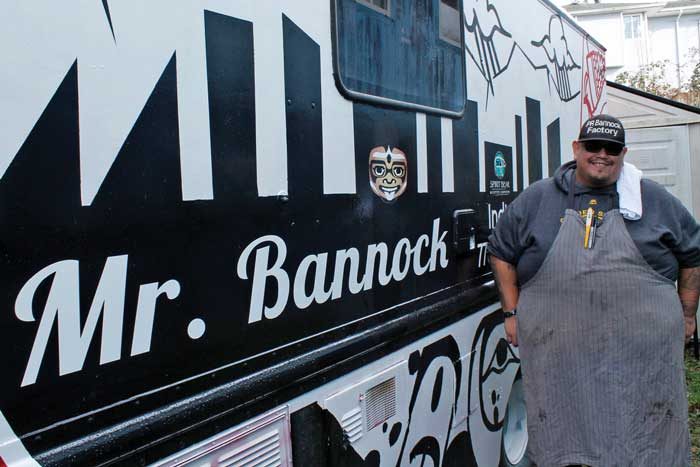 Specializing in bannock and using traditional ingredients like juniper berries and smoked salmon, the business launched Jan. 27 in Vancouver and gained the permit to operate on Squamish Nation territory on Feb. 8.

Natrall is following in his great-grandfather’s footsteps, who learned to cook in the army and went on to run two restaurants in Seattle.

When Natrall was learning to cook, his cousins would heckle him, he said, just as his great-grandfather was teased back in his time for doing what was thought of as a “woman’s job.” 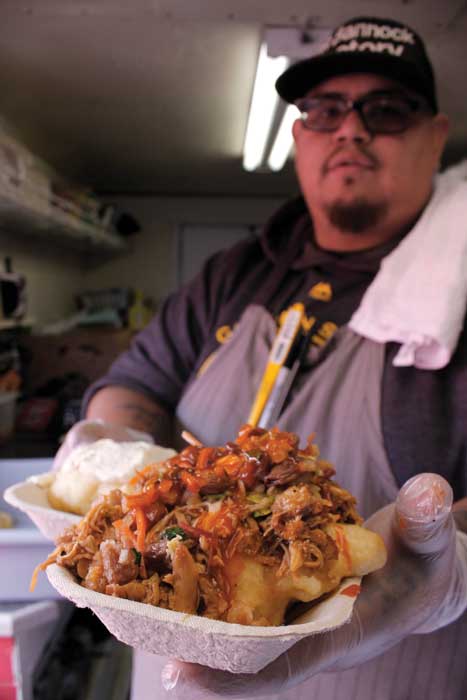 For the $10 Waffle Bannock, Natall dry rubs the chicken with junniper berries and then smokes the meat for 13 hours.

“Two cousins were bugging me—‘go wash my dishes, go make me something’—but now they work for me,” he said with a laugh in an interview.

Natrall left a full-time cooking job to pursue his own business two years ago. In 2017, he took home third place for his Indian Tacos at Taco Fest—beating out 20 other vendors; and then sold 2,100 tacos at the 2017 National Aboriginal Day celebration.

“We built on those blocks and now we have a food truck,” he said.

Mr. Bannock features traditional ingredients with a modern twist. His pulled pork sandwich, a best seller, uses a rosemary and juniper rub. It’s a version of chicken and waffles, except the meat is pulled pork and the waffles are bannock, said Natrall.

He runs Mr. Bannock with help from his family. He and his partner Kelley Lloyd-Jones have six kids between them.

Two kids, nine-year-old Marcus and 10-year-old Arionna, are taking an interest in Mr. Bannock and helping their dad prepare food.

But his biggest helper is his partner.

“I tell her there’s no Mr. Bannock without the Mrs.,” he said.

Natrall’s next project is assembling an Indigenous cooking team to compete locally and eventually in the 2020 Culinary Olympics, which he first competed in in 2012.

“There’s almost a 20-year absence of Indigenous people going to the [culinary] olympics,” said Natrall. “There’s a huge gap for Indigenous food and we need to start building on that sooner than later.”