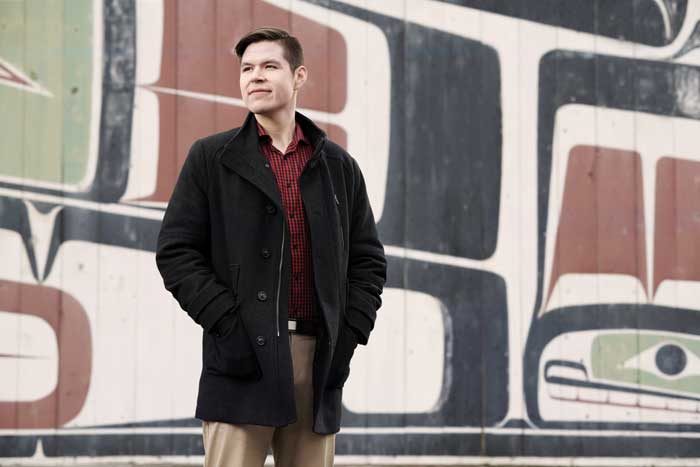 At just 24 years old, Darcy Good has accomplished a lot.

Graduating high school early at 16 years old, the Snuneymuxw member has been in university since 2010, and medical school since 2014. He’s the youngest of 32 students in the University of British Columbia’s Island Medical Program in Victoria, and the first in his community to get into medical school.

Recently, Good has been in the spotlight as one of several students featured in UBC’s “For a better BC” campaign. The far-reaching campaign has showcased outstanding students from various disciplines in ads online, on the radio and on billboards.

Good had agreed to take part in the campaign a while back, he said, then hadn’t thought about it until he started seeing his face on billboards.

Suddenly, everyone in proximity of the far-reaching campaign knew about his educational journey.

“Being able to be involved in the UBC ads, it’s raising awareness (for Indigenous healthcare),” he said.

The ads feature Good’s own story about going to medical school and his personal to improve mental healthcare for Indigenous communities.

Good said he initially aspired to be a family doctor, ever since he was a kid and an intensive-care-unit doctor saved his stepfather’s life post-heart attack. But after trying a psychiatry
rotation, he changed his mind.

“Essentially you go through each specialty (as part of the program),” he explained. “So I had my psychiatry rotation and I essentially fell in love with it. …ultimately, I really love that
connection with people.”

This summer, Good will start a residency program in the psychiatry department at UBC Victoria – his first choice.

Last summer, he did a four-week Indigenous mental health elective in Maple Ridge, serving the Seabird Island and Sts’ailes nations.

“That’s when this whole plan solidified and I thought this is what I really want to do,” Good said. “I really want to be able to deliver those services directly into the communities.”

Good said he ultimately wants to be able to go into under served First Nations across Vancouver Island to provide culturally-sensitive mental healthcare.

Of course, the Snuneymuxw community is proud of him too. And he’s proud of his community in turn, which recently started building a new state-of-the-art healthcare centre.

“People are just so excited for me and I’m just wanting to do everyone proud,” he said. “My mom (is) my biggest hero my biggest champion, my biggest supporter.”

Good said his mother Debbie raised him as a single parent, making many sacrifices so that he could go to private school, and continues to inspire him to push ahead when things get difficult.

“That’s where a lot of my wanting to give back is coming from is how much of an impact my mom has made,” Good said.

Good’s UBC campaign can be viewed at www.ubc.ca/forabetterbc/darcy.

Unconditional love for my late stepfather