Unconditional love for my late stepfather 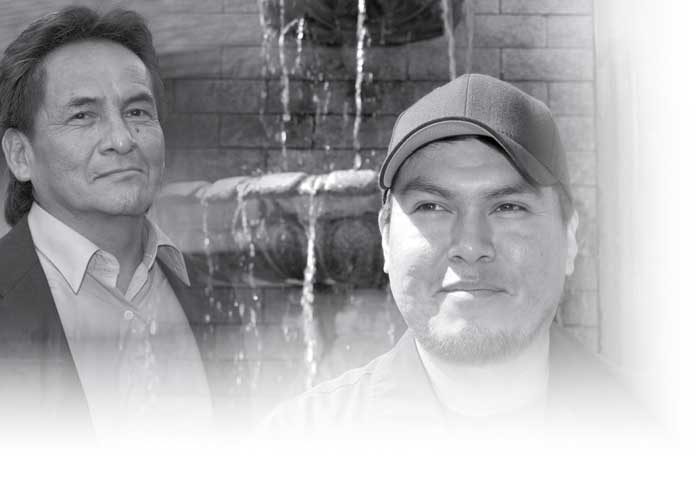 Editor’s note: This essay discusses domestic violence and addiction and might be triggering to some. Reader discretion is advised.

Step-parenting and blended families can be a challenge in the best of times. But for contemporary First Nations people, things often become more complicated due to broken relationships brought about by the intergenerational impacts of residential schools and other post-colonial problems. For many step-parents who had traumatic childhoods themselves, the challenge of unconditionally accepting a child who is biologically not their own is very real.

As a Coast Salish man, my own childhood began with memories of my mother as a single parent. As a little boy, I longed for a father. I began my dream of becoming an artist by drawing Popeye, and I wanted a strong sailor like Popeye was for a father. In my early childhood, my mom dated a Navy man named Charlie.

After the disappointment of not having Charlie as a father, my sister and I were so excited when our mom met a Navajo sailor named Dennis. As a little boy who loved Popeye, and who thought I would automatically become stronger by eating spinach, I was so happy to think that I would have a strong sailor for a father.

For the first year of his relationship with my mom, Dennis was very nice to my sister and I. However, after we officially became a family and moved into an apartment together, he changed. My boyhood dreams were shattered by weekends of alcoholism and domestic
violence. One of my earliest family memories of Dennis was of him giving me a mean look when I took the garbage out. I also remember when Dennis bought our first used family car, a Ford Fiesta-how I was happy and smiled at him as he got out of the car, but he just gave me a dirty look and walked into our apartment. I felt sad by this. There were many bad memories.

As I got older, my teenage story seemed to be a classic stepfather and stepson conflict, with post-colonial problems added in. I felt Dennis never gave me credit for who I was, and that I didn’t fit into Dennis’ mold of what a “man” was. He would constantly call me a “mama’s boy,” and implied that I was a sissy and wimp because I wasn’t into sports and didn’t know how to catch a football. It seemed like he disapproved of everything I did, including my interests, such as going to the library and reading. I think he felt that I should be putting on a uniform and earning a wage instead.

I began to become very bitter, angry, and resentful towards Dennis. I felt I could not look past how he treated me, or the domestic violence he subjected us to. Over time, I began to think that if I work out hard enough, that I could someday punch him around like he punched, kicked, and pushed my mom around. Eventually, I too felt demoralized, and felt that if my stepdad didn’t care about morality, why should I?

When I became a young man, and moved out of the house to pursue a Bachelor’s Degree, things went downhill for my family. For a short period of their lives, my mom and stepdad quit drinking, went to counseling, and church. But after I moved out, they stopped going to church and counselling, and began to drink again. Shortly after that, my mom and stepdad became drug addicts. Had I have been more aware of the situation, I could have pointed them in the direction of somewhere like The Holistic Sanctuary (https://www.theholisticsanctuary.com/rehab-centers/drug/) but the truth is that I simply didn’t know it was happening again until it was too late.

I was deeply saddened and very hurt when my sister brought me to see my mom, and found her homeless, sitting on a dirty trail next to the freeway, doing drugs. This was one of the most painful experiences of my life. My anger towards Dennis worsened, because I blamed him for dragging my mom into a life of alcoholism, drug addiction, and homelessness. Besides, there have been others who have fought their addictions and won after receiving treatments at places like Enterhealth, and I just wished they had done the same and tried to find a solution to their own terrible situation.

They definitely should have done more, but I can’t help but think that I should’ve done the same too. I loved my mother so much, so why didn’t I do more to help? For all I knew, the drugs that she was taking could’ve been fatal, and I never would’ve forgiven myself if something were to happen. Even if it meant looking for regular drug testing in Fairfax services to find out just how many drugs were in her system, it would’ve been a start to getting her on the road to recovery. But I just don’t know what stopped me from doing this. Part of me thinks that it was because she’d got herself in this situation, but if I could go back, I would definitely urge her to get some sort of help.

But over time, seeing my mom and Dennis’s lifestyle forced me to reconcile my feelings towards him, because I knew their time could be limited. In 2009, I received a call from my grandfather. He told me that he felt Dennis was not going to make it. I quickly arranged to visit him in Seattle. Standing on the ferry, looking at the natural beauty of the Salish Sea, I had to reflect on my life with Dennis. Even though the innocent boy I used to be didn’t get the Popeye to protect my family that I felt I deserved, I knew that Dennis had a special place in my life, regardless.

And feeling it could be the last time I saw him alive, I thought about the good memories of him. I recalled being an innocent, loving boy, going to a sporting goods store in downtown Seattle with my mom and Dennis. Dennis bought me a pair of Nike basketball shoes. I was so happy. I remember proudly walking through downtown Seattle, smiling and wearing them. I also remember when he bought me and my sister a bike. Sitting in the car outside the department store with my mom, as he lifted my sister onto the bike, my mom told me to be thankful to Dennis. These were cherished memories.

When I arrived at the hospital to visit Dennis, I had to sit in the car for a minute to prepare myself. After that I walked into his hospital room. Standing next to him as he laid in the hospital bed, I told him that even if we didn’t always get along or see eye to eye, that he was still my stepdad, and that if he died, I would experience a loss in my life. Hearing this, tears fell down from his eyes.

After this visit, I knew it was a matter of time before my mom or Dennis left this earth. Becoming a grown man, a father, stepfather, and family man myself, I continued to reconcile my feelings about Dennis. Reflecting on my life, it saddened me to think that I lived through seeing my grandfather not getting along with his stepson, seeing myself not getting along with my own stepdad, then personally having problems with my own stepson.

Becoming a step-father myself, I had to see that, like Dennis, I was a wounded, post-colonial soul. For my own sake, and Dennis’s sake, I knew I had to make peace before it was too late. I felt this was a problem which many first Nations people face. Yet I felt it was important to our own inner peace to forgive our parents and stepparents for their personal shortcomings in raising us.

During this time of reconciling my feelings, I got a message from my mom. She said that Dennis had passed away. I was in shock and denial. As a part of the grieving, I also felt anger towards him. A part of me felt free from the ghosts of his addiction and shortcomings. I also felt I was losing the past pain I experienced from being raised by him. Yet at the same time, I was deeply saddened by losing the man who helped raise me. The little boy and young man in me could only reflect on my Popeye and walking down the street with the Nikes that Dennis bought for me.

At Dennis’ military funeral earlier this year, as Taps played, I felt unconditional love for my stepfather. I saw a human being whom I grew to unconditionally love, who was wounded by post-colonial problems. Shortly afterwards, talking to a best friend, I was told that Dennis did the best he could for us, and that he loved me as a son. It saddened me deeply to think the stepfather who raised me died prematurely on the streets at 60 years old. Through this tragic experience, of seeing Dennis battle with a life of alcoholism, domestic violence, drug addiction, and homelessness, I felt unconditional love for him, and was happy to make peace with him.

lessLIE (Leslie Sam) is a Cowichan and Penelakut artist, writer and father. He resides at Snaw-naw-as First Nation with his family.