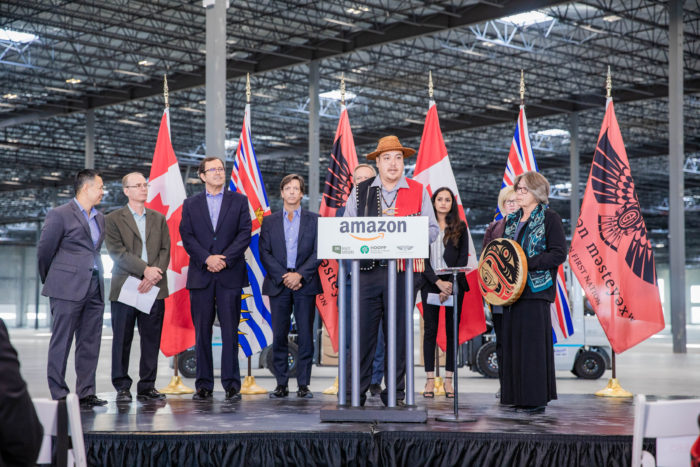 Tech giant Amazon has partnered with Tsawwassen First Nation to build a massive shipping warehouse on the community’s industrial lands.

The fulfillment centre will be Amazon’s first to be built on lands leased from a First Nation. It will be the company’s third in B.C.

During an event at Delta iPort, Tsawwassen Chief Bryce Williams welcomed Amazon to the nation’s lands.

“This is a promising advancement that will continue to unlock the potential of Tsawwassen First Nation as a leading development partner and key economic driver in Metro Vancouver,” he said in a statement.

According to a statement from Amazon, the new facility will create more than 700 fulltime jobs with benefits, with those employees doing work that involves picking, packing and shipping items.

The fulfillment centre is expected to open in 2019.

Glenn Sommerville, Amazon’s Canadian director of operations, said the expansion was made possible thanks to a network of support from Tsawwassen’s leadership and other project partners.

“We are excited to continue growing in British Columbia and especially in the Lower Mainland community known for its talented and diverse workforce dedicated to innovation,” he said.

The centre is part of Tsawwassen’s larger development plan that has included a larger industrial park, new homes and mall developments.

Chief Williams said initiatives such as the new Amazon warehouse have great potential for the community as it works towards a strong economic future.

“The investments we’ve made in infrastructure, and the industrial and commercial projects that we’re moving forward, are creating opportunity and contributing to our community’s long-term economic sustainability,” he said.