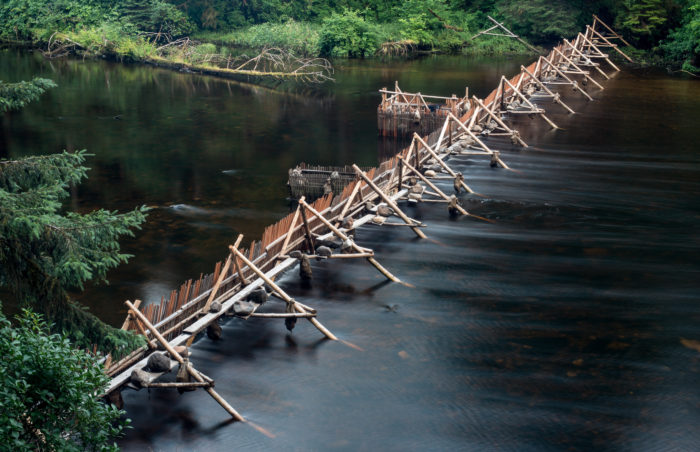 Above photo by Bryant DeRoy.

Traditional fish weirs were once used by Indigenous communities all along the B.C. coast, but the technology was banned by the federal government during colonization.

Now, the Heiltsuk Nation in Bella Bella has revitalized the use of weirs as a way to manage its salmon stocks, and wants to share what it’s learned with other communities that want to do the same.

Heiltsuk’s Koeye River fish weir has been in operation for about five years now as part of a partnership between the nation, its non-profit Qqs Projects Society, the Hakai Institute and scientists from Simon Fraser University.

William Atlas, a salmon ecologist with SFU who has been working with Heiltsuk on the project, explained that the weir is essentially a cedar picket fence that spans the nation’s Koeye River.

The weir is used during spawning season to guide migrating salmon into a trap box on the river – the salmon are then sedated, tagged for tracking and released through a removable panel.

“So any fish that want to move upriver have to move into our trap and be tagged and then released to continue their migration,” Atlas explained.

“It’s a really perfect tool for adaptive management, because you can gauge the strength of the run during the fishing season.” 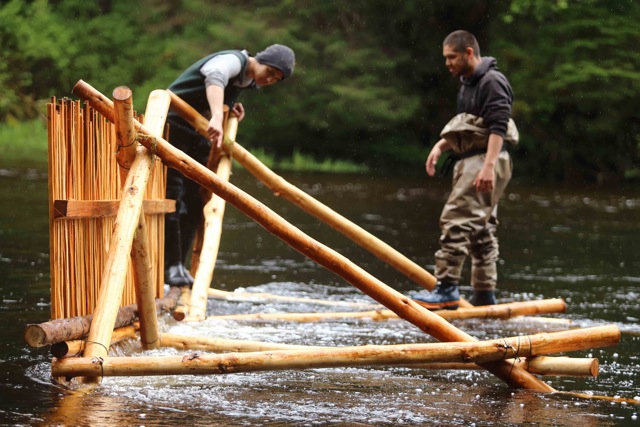 Heiltsuk Coun. Jess Housty said the information gathered through the tracking process has been crucial for the nation to understand salmon movements, survival rates and relationships between humans, bears and salmon. The salmon are tagged with different colours each week that the weir is in operation to give researchers a better understanding of the runs in relation to the time of year and river temperatures.

“It’s really incredible having the level of detailed information about one of our major salmon streams, so we have a really good sense of what the returns are looking like,” she said.

“What I think is really exciting about that, is that’s the level of intimacy that our ancestors had in stewardship.”

Before colonization, weirs were used by First Nations for at least 5,000 years to evaluate salmon returns and use that information to selectively harvest fish.

Atlas said the technology was used in many communities all along the B.C. coast from up north to Coast Salish territory – historic photos show there were once five or six along the Cowichan River.

“Weirs and fish traps are actually banned in the Fisheries Act in 1878, or somewhere around that time, because they were perceived by the federal government to be a threat to the emerging canning industry,” Atlas said.

“They wanted Indigenous fishers to have to work for the cannery, and so you see that all around Canada.”
Although weirs are now not commonly seen in coastal communities, Housty said the Koeye River weir has piqued interest from other nations.

“We’ve had a number of other communities send delegations out to Koeye to see the weir in action,” she said.

“We love having people come to visit and learn about what we’re doing and how we’re doing it.

We’ve learned a lot from the generosity of other people and looking at archival information about weirs. It’s been a collaborative project.”

Leaders of the project are making their research available for any community that wants to make use of it. A full scientific paper on the Koeye River project was published in the academic journal Ecosystem Health and Sustainability and can be found at www.tandfonline.com.