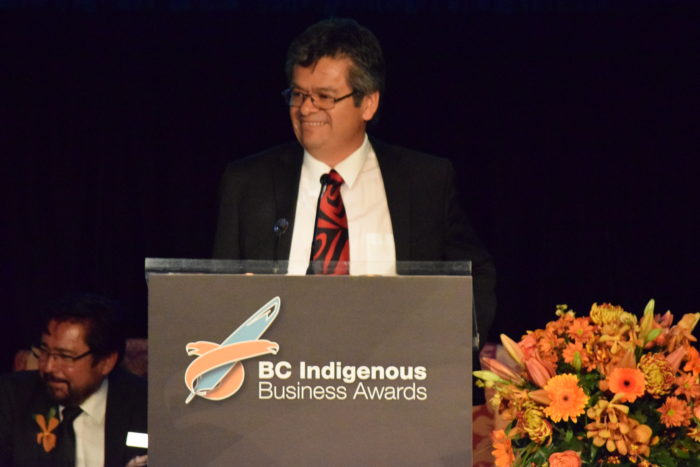 T’Sou-ke Chief Gordon Planes (Hya-quatcha) has been honoured with an award for his community vision and achievements in sustainability and renewable energy.

Planes was presented with the prestigious Individual Achievement award at the annual B.C. Indigenous Business Awards gala in Vancouver on Oct. 15.

The gala is hosted by the B.C. Achievement Foundation, and its board of directors selected Planes for the award.

After various business awards were given throughout the evening, Planes received the final honour of the night.

Planes was introduced by Robert Louie of Westbank First Nation, who won the award in 2016.

“(Gordon)’s guiding principles are planning and foresight for future generations, and his efforts to achieve this are legendary,” Louie said.

“He is a leader in renewable energy and green technology. His community has many visitors from across Canada who look over and examine what they have created at T’Sou-ke.”

Since Planes became chief in 2007, he has led the way in making T’Sou-ke the most solar-intensive community in Canada.

The nation also has an aquaculture business that produces millions of oysters per harvest, commercial wasabi greenhouses, a thriving community garden and more.

During his acceptance speech, Planes acknowledged T’Sou-ke’s council and members for being part of the community vision.

Planes said that in the future, he wants to see the provincial and federal governments walking their talk with Indigenous communities, and to support their efforts in sustainability, language revitalization and formal reclamation of land.

“I’m very glad to be a leader of our community along with all of the members … who think on the same lines,” he said.