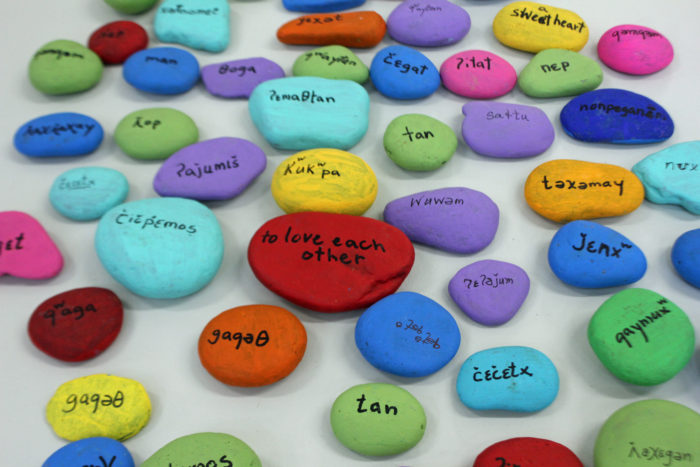 Representatives from Northern Coast Salish nations shared knowledge about the ʔayʔaǰuθəm language during a two-day workshop at Homalco.

The event called “We Will Come Together” was held for nations to discuss knowledge, ideas and revitalization efforts for the language, which many families lost because of residential schools.

The gathering on March 30 and 31 was organized by Homalco’s traditional language team, Marilyn Harry and Vera Peacey.

During the workshop, representatives from Homalco, Tla’amin, Klahoose and K’ómoks shared information about their own language projects.

Ongoing projects include an online ʔayʔaǰuθəm language dictionary, digitizing recordings of elders, a word of the day project and more.

Homalco Chief Darren Blaney, who is a residential school survivor, spoke about the importance of the four ʔayʔaǰuθəm-speaking nations to come together around the language.

“When we come together like this I think we have so much memory that we can build on together,” he said.

“We are getting to that point where it’s going to be harder to keep our language, so I’m glad for the work that you guys are doing today. We have so much work to do to overcome residential school.”

Jacqueline Mathieu of Klahoose First Nation works on preserving ʔayʔaǰuθəm in her community through recording speakers and transcribing the language.

She said that sometimes the work can get overwhelming, but that it is inspiring to gather with other nations to share resources and information.

“Many hands make light work, and standing in front of you guys I really feel that,” she said.

“We’re all working towards the same goal, to revitalize our language and to teach our young people, so one day they’ll be up here doing the same work.”

The United Nations has declared 2019 the “International Year of Indigenous Languages,” meant to highlight the urgent need to preserve, revitalize and promote Indigenous languages around the world.

In late June, a large-scale International Indigenous language conference will take place in Victoria, B.C., that will provide training and practical skills for revitalizing and preserving languages within communities.