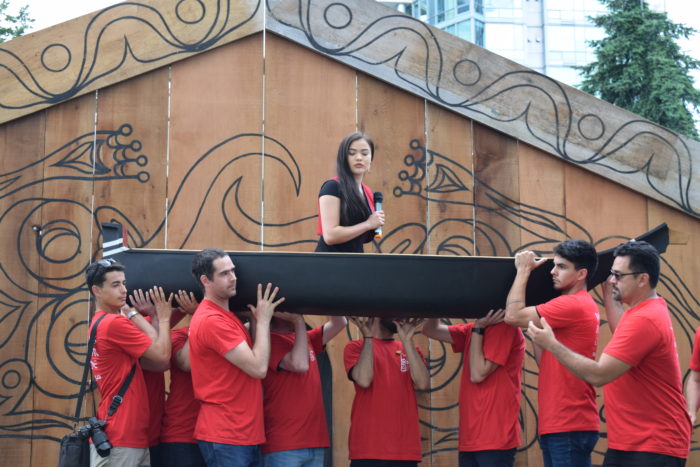 Tla’amin member Ta’Kaiya Blaney was lifted inside of a canoe and walked along Vancouver’s waterfront during a women’s honouring ceremony that coincided with the end of Canada’s MMIWG inquiry.

A group of men carried Blaney, who sang a song that she composed in honour of her late mother Anne Blaney and late sister Marca Dawn Smith as a procession of people surrounded her.

“This song was composed for my mother and for my big sister, who passed recently,” Blaney said.

The event on June 3 coincided with the release of the final report around Canada’s inquiry into missing and murdered Indigenous women and girls.

The Women’s Honour Canoe was carved by Joe Martin of Tla-o-qui-aht First Nation and is the inside is being signed by various woman leaders.

The canoe will eventually be auctioned or sold, according to organizers, as it is part of a fundraiser around the 35th Anniversary of the Meares Island Tribal Park in Tla-o-qui-aht territory.

The event was organized by the IISAAK OLAM Foundation, which works to empower Indigenous conservation areas. The foundation is currently working to rebuild the Tla-o-qui-aht Village of Opitsaht on Meares Island, which was destroyed during colonization.

Eli Enns, the president of IISAAK OLAM, said he first met Blaney five years ago during a parks conference in Sydney, Australia, and heard her sing.

“I had a vision of holding Ta’Kaiya up in a 10-foot canoe such as this, by men of all nationalities, all of us coming together to uphold her while she sings,” he said.

“That was the vision that led to this ceremony today.”

Blaney spoke about the innate link between the MMIWG crisis and environmental destruction, including “man camps” that cause a spike in violence in remote areas.

The final report of the MMIWG inquiry describes “substantial evidence” around the relationship between transient workers that set up camp in mostly remote areas to work on resource extraction projects, and higher rates of violence against Indigenous women in those areas.

“We know as a fact that when you bring pipelines into Indigenous lands, that our relatives go missing,” Blaney said.

The National Inquiry’s two-volume final report was created after two-years of hearings and evidence gathering. It contains 231 recommendations aimed at governments, institutions, social service providers, industries and all Canadians.

It can be viewed online at https://www.mmiwg-ffada.ca.