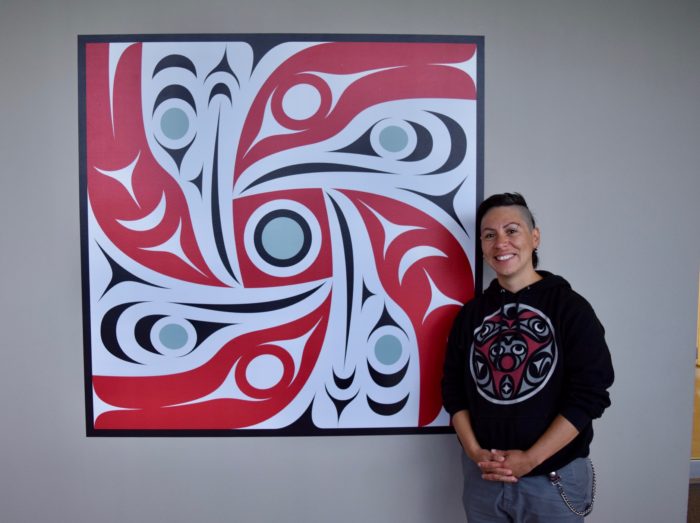 A new exhibit in Victoria is showcasing graphic prints by Indigenous women — all selected by an up-and-coming Coast Salish artist.

Matriarchs: Prints by First Nations Women at the Art Gallery of Greater Victoria was guest curated by Margaret August, who comes from the Shíshálh (Sechelt) Nation.

The gallery’s curator of engagement Nicole Stanbridge said the gallery decided to do the show of works by Indigenous women in response to a previous print exhibit called Form is Meaning.

“What came out of that is we realized that we had very few works by women in our First Nations print collection,” she said.

“We invited (Margaret) to actually work with us, to select works that we could add to our collection and do a show.”

For the show, August has included prints by seven women artists who inspire her, representing various territories around B.C., as well as two of her own works.

She said the first artist she thought of featuring was Susan Point of Musqueam, someone she considers to be a matriarch and leader in the Indigenous art world — Point has broken down many barriers for other Coast Salish artists, bringing the style to the mainstream at a time when it often wasn’t seen.

August knew she knew that she wanted to become an artist herself when she was exploring printmaking as a career, and went to a studio to look into the craft.

“I came across someone who does most of the artist prints that I know … and he was doing a Susan Point print,” she said.

“He went out for a break and I was just staring at the part that he had done already, on the rack, and it just overcame me suddenly. I didn’t even expect it. And it’s brought me here.”

August has been showing her work since 2011. She is currently creating bright, graphic Coast Salish prints, working under the apprenticeship of Lyackson artist Qwul`thilum (Dylan Thomas).

One of her pieces in the show, Rejuvenation, depicts two white ravens on a bright yellow backdrop.

The second more recent piece, Elapsed Time, also featuring birds, has been enlarged and pasted on the wall outside of the exhibit room.

Ravens often show up in August’s work, because they’ve been a constant guide in her life, she said.

“They’ve always been with me … I’m really aware that their presence is quite strong,” she said.

“This piece, Rejuvenation, for example, it’s representative of a dream I had where I was in the middle of the city centre and a black raven was sitting on a branch of a tree, and it turned white suddenly.”

August said in a written statement about the exhibit that it was titled Matriarchs to underline the importance of Indigenous women in the art community and beyond.

“Prior to contact, many Indigenous nations followed matrilineal governance systems,” she said.

“With the onslaught of settler colonialism, patrilineal band systems replaced sacred spaces held for the voices of Indigenous matriarchs … honouring our matriarchs in the arts is like a door that is to be unlocked.”

Stanbridge added that the exhibit is part of a wider effort by the gallery to strengthen its relationship with Indigenous artists and particularly women.

“It doesn’t end with this show, we’re going to keep working with Margaret in terms of visiting with artists and seeing what other work is out there,” she said.

“There’s a lot of behind the scenes work that’s happening on a longer timeline.”

Matriarchs: Prints by First Nations Women will run at the Art Gallery of Greater Victoria until Oct. 6.