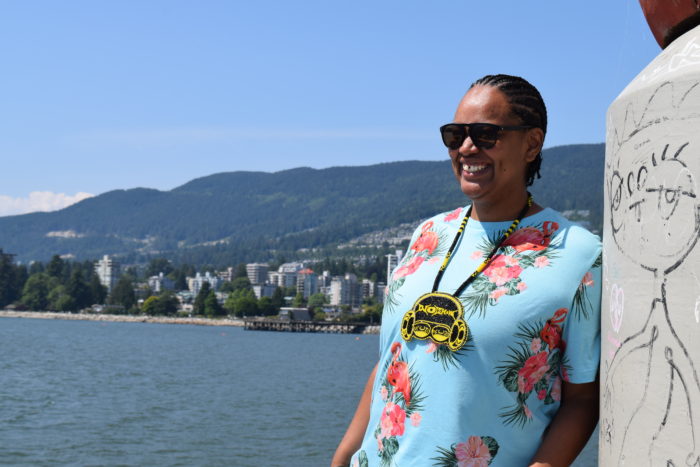 Seven years ago, when Orene Askew first started her DJ business, she woke up after a gig to realize that her townhouse at Squamish Nation was on fire.

The blaze started by accident in her neighbour’s adjoining house, and she woke up in a panic, surrounded by smoke and flames.

“The only thing I thought to grab, because your mind just goes so many places, was my DJ gear,” she said.

“I literally grabbed my laptop and my turntables and just ran out of the house. I didn’t even have any socks on or anything.”

At the time, it was a pivotal moment in Askew’s budding career — she now runs a successful business using her stage persona, DJ O Show.

When she started DJing, she did it with a grant from Squamish Nation Trust to buy the gear, and carved out a niche for herself in a sea of male DJs, showcasing high-energy hip hop and R&B-driven sets.

She quickly became in high demand, playing gigs around Vancouver, Canada and the U.S. She plays everything from nightclub gigs, to weddings, to high-profile festivals — she recently performed at the massive South by Southwest fest in Austin, TX, and the community-run Queer Arts Fest in Vancouver.

As Askew has become more known, DJing has led her to teaching her craft at Vancouver’s School of Remix and mentoring and supporting youth.

She now also does motivational speaking gigs across the country, and has moved into politics as an elected councillor at Squamish Nation.

“It’s the biggest change in our council’s history, eight new councillors, six female and two are from the LGBTQ+ community,” she said.

“It’s a huge turnover, we’re just making history, and it’s a lot of work, but so much fun.”

Since she was elected to a four-year term on council in 2017, Askew, who identifies as two-spirit, has made it a mission of hers to increase LGBTQ+ visibility and inclusivity in her community.

“Another reason why I do two-spirit activism is because my aunt was actually trans,” Askew shared.

“She only lived to be about 44, but it was really tough for her on the reserve. … I wish she could see how it is now. It’s just so much more accepted.”

She sits on the nation’s Pride Committee, and was one of the people behind getting a Squamish Nation float into Vancouver’s Pride Parade last year (something the nation is doing again this year). She is also working on getting both rainbow crosswalks and gender-neutral washrooms in the community.

“Politics is just a completely different world, but I’m glad I’m there just to see it from the inside and to try and help change things,” she said.

“I get to partner with different music festival groups who want to do proper protocol but they don’t know how, really.”
One of the committees she sits on is the Vancouver Symphony Orchestra’s Indigenous council, where she is looking at bringing music training to kids at Squamish Nation.

This month, she will be playing a free two-day Indigenous music festival in Lytton, B.C., called 2 Rivers Remix, where she will be performing as well as hosting a workshop for kids called Diversity Makes Beautiful Music.

“Especially when I’m working with Indigenous youth, I tie it back to the drumming and singing,” she said.

“I always use this analogy … we all have that beat inside of us, we’re all Indigenous, we’ve stood in those lineups drumming, and you get off beat, and then you get back into it. That is DJing right there. And we’ve done that for thousands of years.”