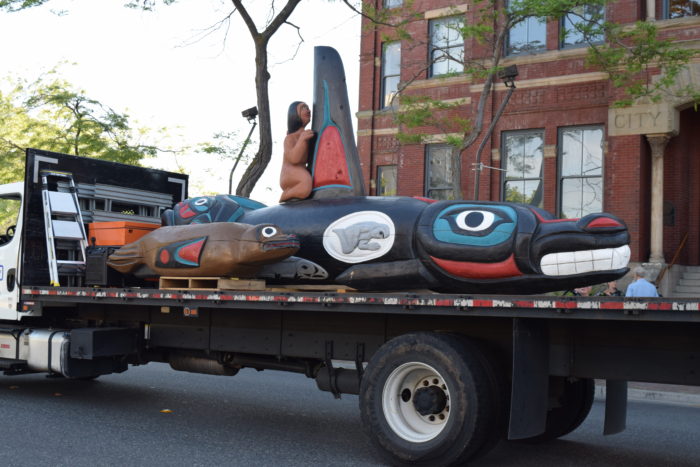 Photo: An orca totem carved by Lummi’s House of Tears carvers arrives in Bellingham, WA, after being journeyed across the United States.

After wrapping up a totem pole journey for an orca in captivity, Lummi Nation has launched a campaign to help dwindling southern resident killer whale populations in the Salish Sea.

A delegation from Lummi journeyed a five-metre orca totem, created by the nation’s House of Tears carvers, from Miami to Washington over two weeks from May 30 to June 15.

The journey was held to raise awareness for a southern resident orca who was taken from Coast Salish waters nearly 50 years ago and has since been in captivity at the Miami Seaquarium — Lummi Nation has been pushing for the facility retire the whale to a sanctuary in its home territory.

During an event outside of the Seaquarium at the start of the journey, Lummi leaders announced a new name gifted to the captive whale, whose performer name is “Lolita” and was formerly known to the nation as Tokitae.

House of Tears carver Doug Sit Ki Kadem James worked on the orca totem in honour of Tokitae, and announced that the whale’s new name is Sk’ali Ch’elh-tenaut.

“It comes from the very waters and the very land where she was captured,” James explained.

“There was an old ancient village … there in Penn Cove. It was one of our ancient village sites, that’s where this name comes from. This is your name, Sk’ali Ch’elh-tenaut.”

Sk’ali Ch’elh-tenaut is the last surviving southern resident orca of dozens that were taken captive from the Salish Sea during the 1960s and 70s and put into aquariums to perform for visitors.

Lummi’s vision for the captive whale is to retire her to a netted-off cove in her home waters, where she would have room to swim and interact with her L-pod family, but still be observed and fed.

Though Lummi has been advocating to bring the orca home, the Seaquarium has denied returning the orca, saying she is safer staying in captivity because of her advanced age and need for medical care.

Throughout the journey, people from cities across the U.S. took part in blessing ceremonies for the orca totem by placing their hands on the carving while praying for Sk’ali Ch’elh-tenaut and wild Salish Sea orcas who are in danger.

During a journey stop in Bellingham, WA, on July 13, people heard how Sk’ali Ch’elh-tenaut has been alone in captivity for nearly 50 years, but still sings the song of the L-pod.

Julie Trimingham, who performed a folk song at the event, said each of the three orca pods — J, K and L — have their own songs that are taught from mother to child.

“So this means that when (Sk’ali Ch’elh-tenaut) was a little child, her mother taught her that song. And she still sings that song,” she said.

Lummi refers to orcas as “qwe ‘lhol mechen,” which translates in their language to “relatives who live under the sea.”

During a closing event in Seattle on June 15, Lummi held a media conference to announce that the totem journey was just the start of a larger campaign to protect the qwe ‘lhol mechen.

Partnering with the Suquamish and Nez Perce tribes, scientists and environmental organizations, Lummi has launched the Salish Sea Campaign with goals to help and revitalize the southern resident orca population.

The southern resident killer whales are listed as an endangered species, and they are being increasingly threatened by a lack of food supply as salmon runs shrink and underwater noise from marine shipping traffic disrupts their communication. Despite recent births, only about 75 remain.

Lummi Elder Raynell Morris said the campaign was launched because the nation fears for the future of the whales and entire Salish Sea.

“Our qwe ‘lhol mechen are telling us that they need help,” she said.

“They’re dying, they’re starving, they’re having a difficult time keeping their pods — their families — together.”

The Salish Sea Campaign includes a call for a cumulative impact study on human-caused stressors to the Salish Sea — such as the Trans Mountain pipeline and Navy underwater weapons testing — and a moratorium on any new stressors until a baseline of health that’s considered adequate to feed the whales has been restored.

It will also include continued advocacy for Sk’ali Ch’elh-tenaut, and Morris said it will involve both ceremonial feedings of the wild southern residents and the creation of foraging stations.

A media release from Lummi called on all communities of the Salish Sea to stand together in protecting the qwe ‘lhol mechen.

“This is a vision of resilience, truth, belonging, and healing for qwe ‘lhol mechen,” Lummi Nation Chairman Jay Julius said.

“This is a battle for the soul of Xwullemy, the Salish Sea.”

More information about the campaign can be found at www.sacredsea.org.