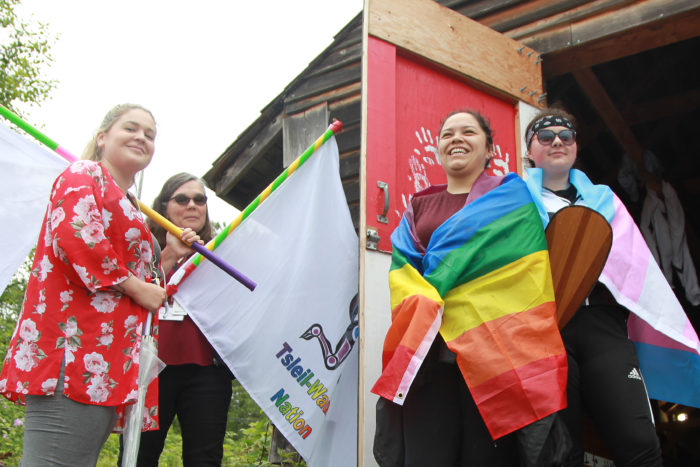 Tsleil-Waututh Nation raised rainbow and transgender-rights flags inside of their new administration building during a LGBTQ+ pride celebration led by two-spirited community members.

The nation was only Indigenous community selected to host a flag-raising ceremony to commemorate the International Day Against Homophobia, Transphobia and Biphobia.

The event marked 50 years since Canada partly decriminalized homosexuality, but Tsleil-Waututh organizers emphasized that such discrimination against gender and sexual minorities was never a Salish value, but imposed by Europeans.

Tsleil-Waututh member Selina Beltran said she hopes that future generations will be able to shed some of those colonial constructs, and live in a more accepting society.

“So they can grow up in a place where they don’t have to jump through … hoops just to get help, health resources, or gender-affirming surgeries,” she said during the event on May 17. “Where there’s no stigma.”

During the event, canoe paddlers brought and carried ashore the rainbow LGBTQ+ pride flag, the pink, blue and white transgender rights flag, as well as Tsleil-Waututh’s own rainbow-coloured Takaya (wolf) flags and marched them to the nation’s administration building, where they were raised.

It was the latest advancement of recognizing sexual and gender diversity within Salish nations; in recent years, more and more First Nations have entered floats into Pride parades, launched LGBTQ-supportive health, spiritual and cultural programs, and boosted their efforts to fully include their two-spirit members.

Beltran spoke about her own journey as a two-spirit person, and her current research in the University of Victoria’s Gender Studies program. Her thesis is about on how two-spirit identity fits in with today’s resurgence of Indigenous cultures.

Two-spirit has become a widely-known concept across the continent’s many Indigenous communities for sexual and gender diversity — based on the understanding that homophobia and transphobia were alien ideas imposed by Europeans as they colonized and imposed their version of Christianity.

“It’s become a sort of Indigenous umbrella term,” Beltran said in an interview. “Unfortunately, there is still not one word that I know of in our language for two-spirit people. … I’ve asked around and asked others to ask around, but I’d like there to be our own word too.”

She and other organizers of the flag-raising said that Tsleil-Waututh linguistics experts are currently in process of determining how best to translate “two-spirit” into the Hǝn̓q̓ǝmin̓ǝm̓ language in co-ordination with members who identify as two-spirited.

Two-spirit educator Sandy-Leo Laframboise said that process can be complicated, as Indigenous languages are tied to the land and creation stories.

“So we can’t just use any word,” Laframboise said.

“Right now everybody is using the English word ‘two spirit,’ but that’s because it was created in order to bring in different [Indigenous] nations.”

Opening the event inside the administration building, member Gabriel George spoke emotionally about community members who “came out” over the years, who helped open the eyes of people in the nation including himself.

“I thank our drummers and paddlers and all of you who came to bear witness to our beautiful family and our lesbian, gay, queer, trans, and two-spirit community — and for having the strength and courage to be true to yourselves, knowing you have paved the path for others in our community,” he said.

“We’ve only been under this colonial system for just about 300 years now. I think about all our ancestors during that time who could not ‘come out.'”

For him, the issue is deeply personal; he spoke about his late brother, Isaac, who came out at a time before it was widely accepted but “was always true” to who he was as Tsleil-Waututh.

“It makes me so emotional to see this happening today, thinking about my brother and the struggles he had,” George said.

“But despite all the stigma in our community at the time, he was always treated with such love and such respect. … That says a lot about our Tsleil-Waututh community and our people. Today my heart is really happy; it’s healing.”

Coun. Justin George told the nation’s two-spirit and LGBTQ+ members that their leaders “stand with all of you” and said the ancestors were also present to support them that day.

“I’m super proud of this nation today,” he said.