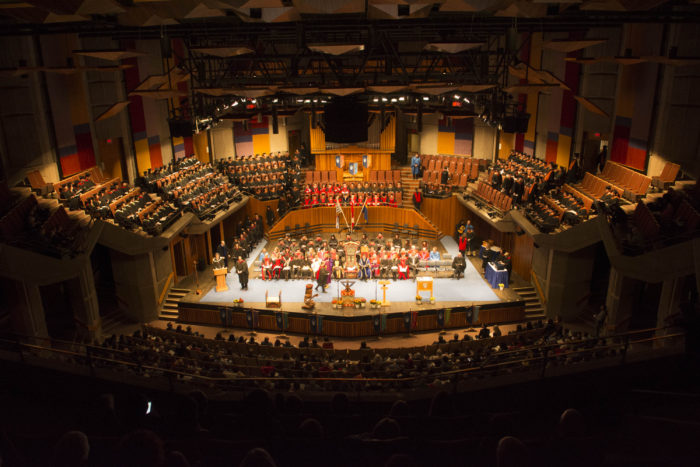 Joe Gallagher (k̓ʷunəmɛn) of Tla’amin Nation has been given an honorary degree for his trailblazing work around Indigenous self-determination and cultural safety.

Gallagher was awarded with an Honorary Doctor of Laws by the University of Victoria during a convocation ceremony on June 11. He was one of six people to receive an honorary degree during graduation events this spring.

Before he received his award, the audience heard how Gallagher led the formation of a new health governance partnership between B.C. First Nations, the province and Canada.

That work included the groundbreaking transfer of federal health services to B.C. First Nations, something that led to the formation of the First Nations Health Authority in 2012, with Gallagher serving as chief executive officer.

He champions what he called “cultural safety and humility” in health services in the province, notably working with the BC Coroners Service to review and change its practices around children’s remains to be more inclusive of cultural practices around death.

Gallagher was previously the chief treaty negotiator at Tla’amin — leading to its final agreement coming into effect in 2016 — and directed programs at Health Canada’s B.C. First Nations Inuit and Health Branch.

Gallagher spoke about how both when attending UVic and at home in Tla’amin, soccer was a driving force from him that tied together everything from cultural teachings to his motivation to get through university.

“I started playing at a young age, 10 years old, but it was a challenging time because I was kind of the youngest in my age group,” he said.

“I reflect that playing soccer in my community was really an opportunity to express myself as a modern-day warrior for the Tla’amin Nation.”

Gallagher said as both his parents attended residential school, playing soccer gave him an opportunity to learn culture from older players who would incorporate teachings into the game.

When he first showed up to the UVic at 17, it was one of his first times leaving the reserve, but he wanted to try to play for the school’s Vikes soccer team.

Sure enough, he made it on the team after his first tryout, and earned his Bachelor of Arts degree in 1987 while playing university soccer — in 1993, he played for Team B.C. at the North American Indigenous Games.

“It was really an awakening for who I was as a young man,” he said, adding that there weren’t many other Indigenous students around him at the time.

“This was the identity I was looking for, the one I needed to keep me at school.”

While he was receiving his honorary degree, Gallagher thanked his late mother and father, as well as Elsie Paul and Betty Wilson from Tla’amin, and the late Leonard George of Tsleil-Waututh, who have supported his work along the way.

Sti’tum’at Ruby Peter of the Quamichan First Nation has received an Honorary Doctor of Laws for her lifetime of work in teaching and revitalizing Hul’qumi’num, including co-authoring the extensive Cowichan Dictionary in 1995.

Meanwhile, Elder STOLȻEȽ John Elliott of Tsartlip has been given an Honorary Doctor of Education for his pivotal role in reserving and revitalizing the SENĆOŦEN language — among his achievements, Elliott co-founded the groundbreaking language resource FirstVoices in 1999.