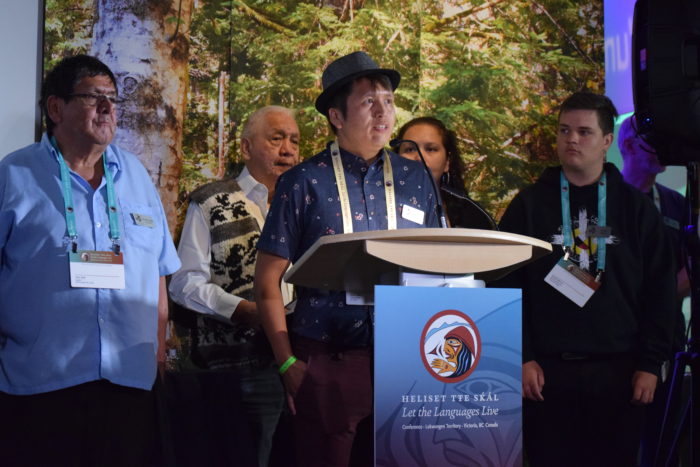 Songhees Nation’s Indigenous Lekwungen language has been in a precarious state in the community, says Coun. Garry Sam, with just one fluent speaker who is in his 80s.

But now, the language has started to come full circle — children are the ones who are bringing the sound of Lekwungen back into homes.

“On a recent annual survey about language involvement, for the first time, family members reported that it was their children who were the ones speaking most often at home,” Sam said.

He shared the story during the first day of a huge international Indigenous language conference called HELISET TŦE SḰÁL  – ‘Let the Languages Live’ that took place in Victoria from June 24 to 26.

The event was hosted in British Columbia because of the incredible language diversity and leadership in language revitalization, said First Peoples’ Cultural Council CEO Tracey Herbert.

The province is home to more than half of Canada’s 60-plus Indigenous languages, with 34 languages and over 90 dialects — though many speakers have lost that ability because of residential school, its intergenerational impacts, and other assimilation efforts.

“As is the case around the world, Indigenous languages in Canada are at risk,” Herbert said.

“Just three per cent of First Nations people here in B.C. consider themselves to be fluent in their ancestral language. That’s about 4,200 people, and many of those are elders.”

She said despite the alarming statistics, there has been a positive and growing change, thanks in part to the increased visibility of the languages that uplifts and supports the existing work being done in communities.

She said the resurgence of young speakers in Songhees reflects a larger trend across the province.

In Songhees, creating more speakers has been the result of seven weekly language classes for members and staff, as well as chief and council endorsing paid time to learn Lekwungen.

Other communities have found many other creative ways to keep their languages strong using technology, mentor-apprentice programs, language nests and more.

There are more than 7,000 languages worldwide, with about 3,700 of those being Indigenous languages.

During the conference, dozens of experts, speakers and advocates shared their community’s stories, presenting on a range of topics including science, technology, learning away from home and documentation.

Dr. Lorna Wanosts’a7 Williams of Lil’wat Nation, who has dedicated her career to revitalizing language in her community and advocating for Indigenous education, received a standing ovation for her keynote talk on June 25.

Williams, a professor at the University of Victoria, spoke about the challenges around bringing back language and ways to overcome them.

She encouraged the crowd to support one even if the words aren’t said perfectly, to encourage silent speakers and to welcome people who live off-reserve to learn and speak.

“It’s only with regenerating the habitual use of our languages in every part of our community that we’ll begin to learn and speaking will become naturalized. That’s our challenge,” she said.

Williams said that it is a huge challenge to bring the languages back, and she thanked other language advocates for the work they have done.

“We live in a world where many resources have been put into ensuring, in this part of the world, that English takes precedence over everything,” she said.

Herbert said it was a “watershed moment” for language revitalization when the UN sanctioned 2019 as the year of Indigenous languages.

“This global recognition of the importance of Indigenous languages and the threat that they face is key to mobilizing support for the work that we all do at the local level,” she said.

Sebastien Goupil, the secretary general of the Canadian Commission for UNESCO agreed, saying that his organization is starting to perceive a real change in Canadian awareness in the need to preserve and revitalize Indigenous languages.

“There is no doubt for me that this important conference will be recognized as one of the most defining moments of the International Year of Indigenous Languages,” he said.
“We are highly motivated as a commission to keep this momentum going, and maybe it is now time to ask to turn this year into an international decade.”